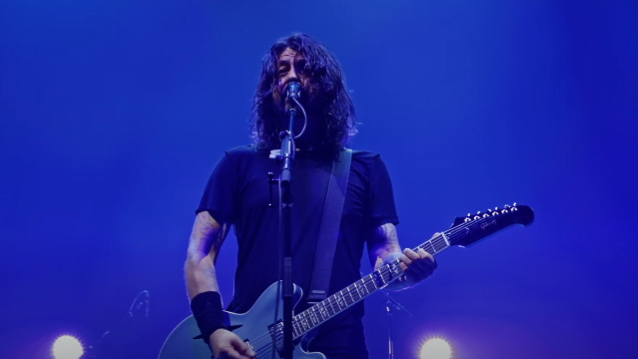 FOO FIGHTERS have teamed up with MSG Entertainment to release a mini-documentary chronicling the band's concert at Madison Square Garden in New York City following 466 days without live music.

The official description for the nine-minute documentary, which can be seen below, reads as follows: "On June 20, 2021, after 466 days without live music, FOO FIGHTERS reopened Madison Square Garden to a sold-out crowd, marking the first full capacity concert in a New York arena since the start of the pandemic."

Dubbed "The Day The Music Came Back", the featurette includes a mix of live footage and backstage testimonials from the crew of the iconic venue, which asked all audience members to show proof of vaccination to enter.

To warm up for the MSG gig, FOO FIGHTERS performed five days earlier at the Canyon Club in Agoura Hills, California. Canyon Club also required ticket buyers to be fully vaccinated against COVID-19 to attend.

Last November, FOO FIGHTERS played a livestreamed concert for fans at The Roxy in West Hollywood, California. Six months later, they participated in the televised "Live Vax" concert at SoFi Stadium in Inglewood.

FOO FIGHTERS will next perform at the Forum in Los Angeles on July 17.

The band is continuing to promote its latest album, "Medicine At Midnight", which landed at No. 1 on Billboard's Top Album Sales chart with first-week sales of 64,000 copies in the U.S.