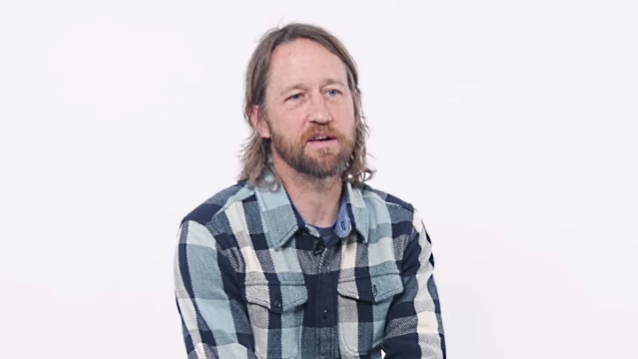 NME recently sat down with FOO FIGHTERS guitarist Chris Shiflett and asked him to give his take on Arsenal, Liam Gallagher and Donald Trump. Speaking about the 45th president of the United States Of America, Shiflett said (see video below): "Good Lord. The great orange menace. Yeah, the embarrassment of our times. Donald Trump… I'm not a fan."

A year ago, Chris's FOO FIGHTERS bandmate Dave Grohl said that he was "ashamed" of having Donald Trump as the U.S. leader, explaining that the billionaire real estate mogul "seems like a massive jerk."

"Today, the American Dream is broken," Grohl told the British GQ magazine. "I've probably travelled internationally more than our current president and the one thing I understand that he doesn't is that the world isn't as big as you think it is. It is all in your neighborhood. India, Asia, Iceland aren't other solar systems. I am ashamed of our president. I feel apologetic for it when I travel."

In 2017, Grohl said in an interview with Switzerland's SRF 3 that criticism of Trump's extremist rhetoric by musicians and Hollywood stars only serves to embolden and fuel his base. "I think that for years maybe they felt like the minority and now all of a sudden there's a voice that they can sort of attach themselves to, and the more pushback they get from that, it's like the stronger they feel in a lot of ways," Grohl explained. "So all you can do is fight the good fight every day when you wake up and try to be a good person and treat everybody with respect."

Asked how he, as a responsible parent, talks with his kids about the often-inflammatory behavior we see from the president on a daily basis, Grohl told SRF 3: "I remember the night of the election, I had to sit down and have a talk with my daughter. She was terrified, man. And I basically told her what I'd just told you. I was, like, 'You can't give up hope. You just have to fight the good fight. And the things you believe in… You have to stand up and represent the things that you actually believe in.' That's what everybody should do. But I think it's hard for a kid to understand that."

FOO FIGHTERS have spent the last couple of years touring in support of their ninth studio album, 2017's "Concrete And Gold".