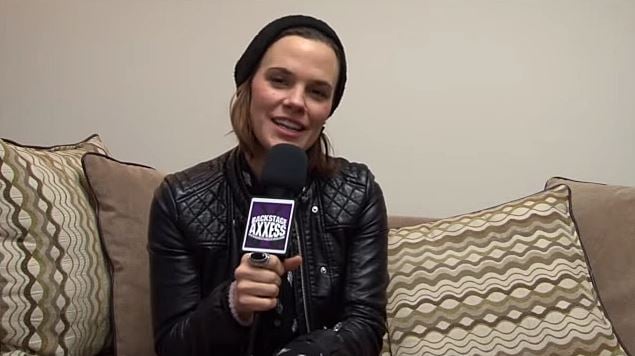 David "Gus" Griesinger of BackstageAxxess.com recently conducted an interview with FLYLEAF singer Kristen May. You can now watch the chat below.

Speaking about FLYEAF's switch from longtime producer Howard Benson to Don Gilmore for the band's fourth studio album, "Between The Stars", Kristen said: "Howard Benson was obviously amazing with them, and I worked with him on a couple of songs whenever I just joined the band, whenever we put out the 'Who We Are' EP, we wrote one song, 'Something Better', as our original song, with Sonny from P.O.D., to kind of show a little bit of a taste of where we were going. Not that we really knew where we were going — let's be honest — but something to show what we do together. And I certainly liked him. But I think, whether the band felt it at first, I thought, 'Okay, I'm a new singer for you guys. We have the opportunity to try something new. It's already gonna be different, because I'm a different person than your previous lead singer. It's still gonna be FLYLEAF, obviously, because four out of five members are still there.' I was one of the people that said, 'You know, could we just at least entertain the idea of trying something different.' I just felt something in my gut, like maybe we should. And then the guys started to think,'You know, maybe that could be a good idea.' And surely, we could have gone back and worked with Howard, but Don Gilmore was super interested and loved our demos that we did in Texas and seemed to be just such a great guy. And he's obviously done some amazing stuff, with DASHBOARD CONFESSIONAL, LINKIN PARK and PEARL JAM, so we thought, 'We might as well try that.' And it turned out great. He was awesome to work with."

In an interview with Music Radar, FLYLEAF guitarist Sameer Bhattacharya talked about what it was like working with Don Gilmore on "Between The Stars". "This is a more uninhibited record for us," he said. "It's full of spontaneity. Don calls it 'capturing the magic,' and that's what it really is. Before, we were so obsessed with details and getting what we thought were perfect takes and perfect sounds, but Don was like, 'Chill out. We're not capturing perfection; we're capturing magic.' That was a new thing for us — letting go. If there was a mistake or if something was a little offbeat in a take, a lot of times Don would say, 'That's the one. There's something in that performance I like.' That was hard for us to get our heads around at first."

Asked at what point he got more comfortable with what Gilmore wanted from the band, Bhattacharya said: "I don't think it was until we got the master tracks back. [Laughs] I was pretty nervous the whole time, actually. I'm still so used to Howard Benson's approach. He would go in with a plan: how we're gonna track things, how everything was gonna sound, what kinds of programming he'd use. He put a lot of programming on things; you might not notice it, but it was there. He worked it all out beforehand. Don was very laid-back: 'Hey, man, let's just throw it against the wall and see what sticks.' And I guess that comes out of trust — he trusted that we'd come up with good stuff. Like I said, it was new territory for us to explore."

Regarding what made FLYLEAF want to work with Don, Bhattacharya said: "Howard is a phenomenal producer, and if we would've gone back to him, it wouldn't have been the wrong choice. For me, the main thing was that I wanted a set of fresh ears. Plus, I didn't want the new record with Kristen to be compared with the old records, which it would have been if we did it with Howard. It was important to work with somebody who never did anything with us before; that way, nobody was locked in the past."