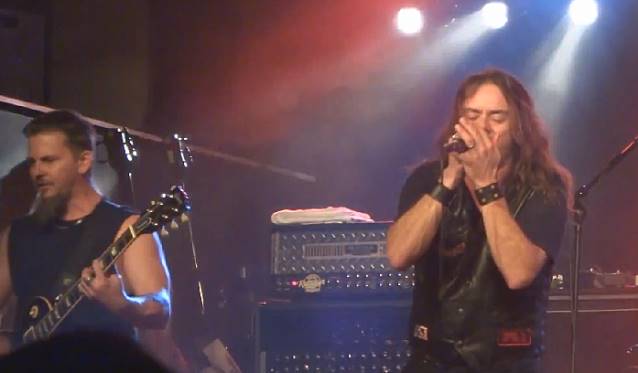 Fan-filmed video footage of FLOTSAM AND JETSAM's March 1 performance at Sala Totem in Villava, Spain can be seen below.

Comments FLOTSAM AND JETSAM: "We have re-recorded 'No Place For Disgrace' because we have had a lot of requests to remix this record.

"The master tapes have been very difficult to obtain so we decided to re-record the album and use some of today's technologies to recreate it. The aim was not really to change but to enhance it with the opportunity with the use of new tools. We have the time available as well, and it just seemed like a no-brainer.

"A lot of the die-hards are really nervous about it, but we think after the final result, they will embrace it. The sound quality is 100% better and more refined!"

FLOTSAM AND JETSAM will play a special concert at the Keep It True XVII festival, set to take place April 25-26, 2014 at Tauberfrankenhalle in Lauda-Königshofen, Germany. The band's set will consists of songs only from their first two classics — "Doomsday For The Deceiver" (1986) and "No Place For Disgrace" (1988).

FLOTSAM AND JETSAM's lineup for Keep It True XVII will consist of four of five original members — Eric "A.K." Knutson (vocals), Kelly Smith (drums), Ed Carlson (guitar) and Michael Gilbert (guitar). Playing bass at the show will be Michael Spencer, who replaced Jason Newsted in 1987 and did the first European tours with the band.

Funding for the new FLOTSAM AND JETSAM album was aided by the PledgeMusic.com project, which encourages fans to contribute funds to the recording of albums and the artists themselves to donate to charity as a part of their fundraising.