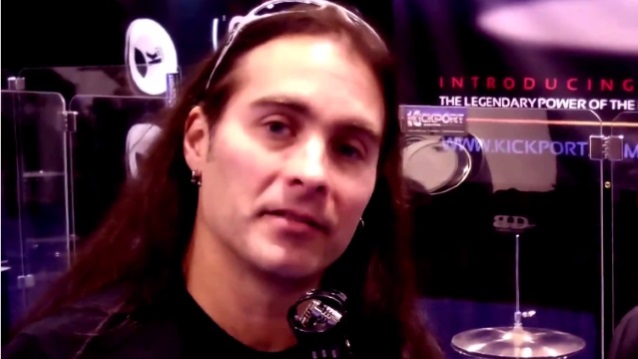 FLOTSAM AND JETSAM has announced the addition of drummer Jason Bittner (SHADOWS FALL) to the group's ranks. Bittner joins the veteran Arizona metallers as the replacement for Kelly Smith, who recently left the band to focus on family matters.

Being as Kelly's need to move on wasn't a band decision, FLOTSAM first looked to drummers that Kelly himself would want to see perform with the band.

"In my opinion, Jason in one of only a couple of men on my short list for the job," states Kelly.

"I was humbled to hear, after first meeting Jason in 1988 in Boston, that I had inspired him as a drummer."

Says Jason: "I have been a FLOTSAM AND JETSAM fan for decades, following the band around the East Coast in the eighties and nineties.

"I've been lucky enough to be in the background of the FLOTSAM AND JETSAM camp as a fan, supporter, and gear leader to my dear friend, Kelly David Smith.

"I am hard at work relearning all the classic FLOTZ material and can't wait to record and tour with the band in 2015.

"This will become my focus after the completion of the 2015 U.S. SHADOWS FALL hiatus tour, which will happen spring/summer 2015.

As FLOTSAM prepares to enter the studio to record its next album — tentatively due in April 2015 — Jason's involvement will add a new element to the band's sound, along with the addition of Steve Conley on guitar and Michael Spencer (who previously contributed to the writing of the band's classic 1988 release, "No Place For Disgrace") on bass.

"The band already has over 20 songs in the works, so there's certainly no shortage of material to pick from," says Spencer.

"Conley, along with guitarist Michael Gilbert, have been engineering pre-production tracks for the album at their respective studios that include a few songs written during the 'No Place For Disgrace' era of the band.

"There's a great, old-school thrash vibe going on with the direction of the songs and what originally influenced the band, mixed with a little of what we like about today's sound, in metal. We've also just begun to look outside of the band for a producer to take this album to where we hear it sonically, so we'll see where that side of things goes."

FLOTSAM is currently finalizing plans to tour Europe in the spring of 2015, with summer festival dates planned throughout Europe and beyond.