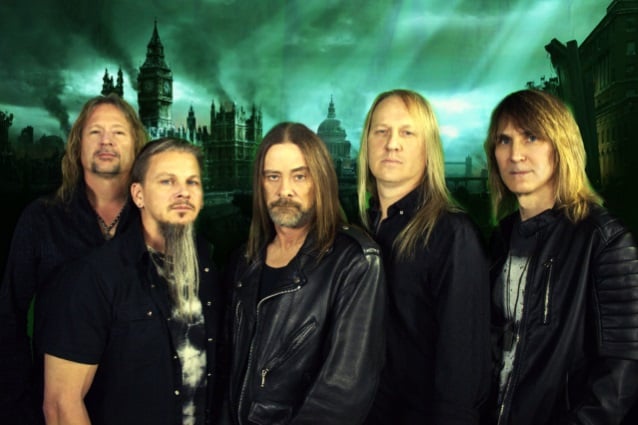 FLOTSAM AND JETSAM vocalist Eric "A.K." Knutson and guitarist Michael Gilbert spoke with Capital Chaos TV prior to the band's June 12 performance in Sacramento, California. The full conversation can be seen below. A few excerpts follow (as transcribed by BLABBERMOUTH.NET).

On touring with HAMMERFALL:

Eric: "Before this tour, I had no idea who HAMMERFALL was. I had heard the name a bunch of times because they're pretty big in Europe, but I've never seen them live, and I've never really listened to a HAMMERFALL album before this tour. But their songs are extremely catchy. You find yourself singing them days afterward, and they're really good at it. The players are amazing in that band. It's been kind of a nice surprise."

Michael: "After the third day [of the tour], I pretty much knew all the tunes they were playing. My favorite one's 'Last Man Standing' — that's a killer song. You can't not sing along with their tunes."

On how their 2016 self-titled album was received:

Michael: "I think it put us back on the map again. A lot of people are saying it picked up right from where 'Drift' left off, which was our fifth record. Whatever happened between — the lineup changes and stuff like that that happened between there, [we] kind of slipped off the FLOTSAM path, but now it seems like we're realigned with what's going on with each other and our path, as far as [getting] FLOTSAM AND JETSAM back in line the way it's supposed to be. We have a new one coming out on November 9, and that's going to be even more along the same path we're following. It's heavier, more melodic [and has] more choruses."

Eric: "It got us to a point where we can get back to where we once were touring-wise, guarantees and the amount of people at the shows. I think that our latest record is really doing a lot for us in that category."

On the importance of album sequencing in an increasingly digital age:

Michael: "I still think of it like an old-school side A and side B. When I listen to something, I definitely want to start with the best song first and kind of work its way down, but you always want to have your last song a great song too so you leave with a bang. But realistically, do people have a chance to sit down and listen to a whole record — do people have time to do that these days? I think they might listen to three or four songs and come back to it, but song order, I think it's definitely important to keep your vibe of ups and downs on your album, a lot of color, instead of everything just blazing fast and then it's over. I think there's some boredom to that if it's just one speed."

Eric: "If you're listening to a FLOTSAM record at a party, you're never going to think, 'Wow, that was one long song,' because we try to keep the songs that are similar-sounding away from each other on the record. You're never listening to a song that sounds similar to another song. We always keep that kind of stuff in mind. We like the flow of the record to be ear-pleasing."

Michael: "It was almost like a miss at first when it came out, because people were like, 'This is really weird for FLOTSAM,' but it seems like it's withstood the test of time for us. Now, we're getting people bringing the albums for signing and getting people saying, 'I really love 'Rabbit's Foot'; I really love 'Ugly Noise', 'Gitty Up'. I don't know — I think that was the next step to get us to getting the next step in line, back on track."

Eric: "There was a time, 'Quatro'/'Drift' era, [when] we didn't really know or care what direction we were going, whether we're going light and more commercial or heavier and more thrash. Not only we were not trying to go a direction, but we were just letting it kind of flow out. Whatever happens, happens, song-wise. That's kind of the same thing we did with 'Ugly Noise'. It really had no agenda of where we were going with those songs; we just wrote songs, and whatever came out, that's what we did. That's proven to work pretty good for us in the past, so it worked pretty good on 'Ugly Noise', too."

Eric: "The three records on MCA, the label and management and agents were all kind of trying to push us in more of a commercial direction. We're obviously no longer with that label or those managements or those agents, because they pushed a little too hard sometimes. We're like, 'That's not us — we are who we are.' We don't really aim a [certain] direction — we just kind of do what naturally comes out, and if that's cool enough to sell enough records to keep us going, then that's great."

Michael: "They pushed it hard enough for me to leave. I took a leave of absence when all that stuff started happening, and this guy called me back when all that was said and done, and I was like, 'Sure, I'd love to come back and play with the band."

On what to expect from their new album, "The End Of Chaos":

Eric: "There's 12 songs on the record. This was [whittling] down from 40-something songs these guys wrote for me to put lyrics on, and we had to quickly go through all of them and go, 'Which ones capture our attention the most?' Those are the ones we concentrated on. There was just great song after great song after great song coming to my house every other day, and I'm like, 'Wow, how am I going to keep up with this?' It worked out pretty good."

Michael: "We used to have a certain template that we'd write. Now, we're writing more for this guy to sing a heavier, more memorable chorus for people. You're always learning as a songwriter, trying to achieve the perfect chorus that someone's going to remember after the song's over. If you've got that going, then you've [written] a successful song."

Eric: "Things have evolved a little more catchy with our songwriting, but not really on purpose too much. It was just as we evolve and our tastes and our loves in music evolve, so does our writing. I really like the direction we're going now."

Michael: "Anything that we've ever made, it always went right back into it."

Eric: "We're always trying to get to that next level of comfort on the road, and with crowds, and with selling merch. It's kind of a constant battle, but it's worth it. I don't know if we're really dedicated to his band or if we're just really stupid, but we just keep going and keep going and keep going. I think one of the big things is, we really love being on stage playing our songs. A lot of bands have to play songs every night that they don't even like, but we really enjoy playing our songs — the old stuff, the middle-of-the-career stuff, the new stuff. Everything is a lot of fun to play, and I think we enjoy listening to ourselves play it every night. That keeps us going a lot."

"The End Of Chaos" will be released on November 9 via AFM Records. 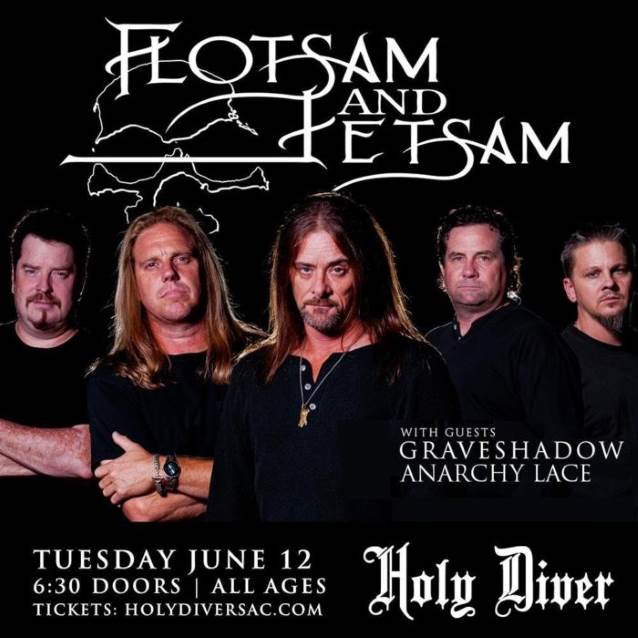