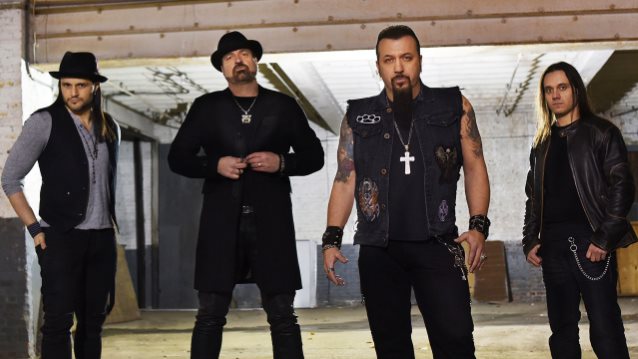 The Florida Highway Patrol has identified the people involved in yesterday's crash that resulted in the death of ADRENALINE MOB bassist David Zablidowsky.

The accident occurred near Micanopy early Friday afternoon when a tractor-trailer veered off Interstate 75 and struck the band's RV, which had pulled off the highway with a flat tire. ADRENALINE MOB was traveling in the RV and a van that was pulling a covered trailer.

The people in the crash and their injuries, as per the Florida Highway Patrol:

* Jason McCole, 41, of Wilksbarre, Pennsylvania, driver of the RV, who was seriously injured;

* Zablidowsky, 38, who was a passenger in the RV. [Note: The Florida Highway Patrol had not released David's identity to the media as of Friday evening, but Zablidowsky's brother Paulie confirmed his passing in a Facebook post.]

* A second passenger in the RV, ADRENALINE MOB singer Russell Allen, 45, of New Jersey, who was seriously injured;

* A fourth passenger, Dale Campiglia, 51, of Levittown, New York, who was seriously injured;

* A fifth passenger, Robert Dressler, 45, of Plaines, Pennsylvania, who was seriously injured;

* The driver of a 2003 GMC Sierra, ADRENALINE MOB drummer Jordan Cannata, 27, of West Babylon, New York, who was seriously injured; and

The status of the injured is currently unknown, but Orlando's girlfriend Dana Griffo clarified on Facebook late Friday night that Orlando, Allen, Cannata and Dressler were "banged up but ok." She also said that she was "praying for" Campiglia, Rains and McCloe.

Thank you all for the love and support. I can't read and reply to everyone right now but appreciate all the love u are...

Crash on I-75 near Micanopy. FHP says there were three vehicles involved. One fatality confirmed at this point. pic.twitter.com/UMUaf8AtVS