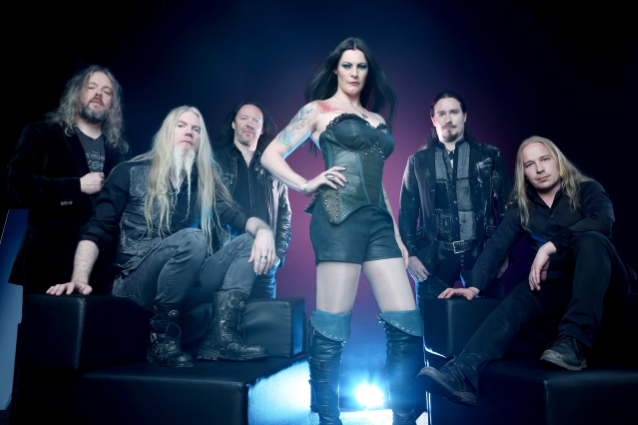 In a recent interview with Rocker.sk, NIGHTWISH singer Floor Jansen was asked if the band would ever consider playing a one-off show, or doing an entire tour, backed by an orchestra. She responded: "I've seen indeed that a lot of [other] bands have been doing it, and that would almost be a reason to not do it; there's nothing special anymore. I've also how immensely difficult it is to actually get a proper sound live. So there are so many compromises that, for us, it's never been that interesting to do. And surely a tour, imagine a whole orchestra, the amount of people… I've been on tours like that — it's very, very, very, very complex. It doesn't mean it's not possible, but for us, it's so far has never been something that we really envision we can… Plus, to emphasize the orchestral part is not really necessary in what we already bring live, with the six people we have on stage at the moment doing all kinds of stuff. You'll see the visuals later on at the show," referring to the concert that took place later that night in Bratislava, Slovakia. "There's so much happening. That's enough."

NIGHTWISH keyboardist and main songwriter Tuomas Holopainen recently said that "all the songs" for the follow-up to 2015's "Endless Forms Most Beautiful" album have been completed musically. "I'm still working on some lyrics," he said. "And, of course, the arrangement process, the rehearsals are gonna take months — it's gonna take all of next year, actually, But all the songs that are gonna be included on the album, with the titles, with the album title, everything's now there. So from now on, it's just the arranging and the polishing the corners."

NIGHTWISH has spent the last few months on the road in support of its recently released "Decades" compilation.