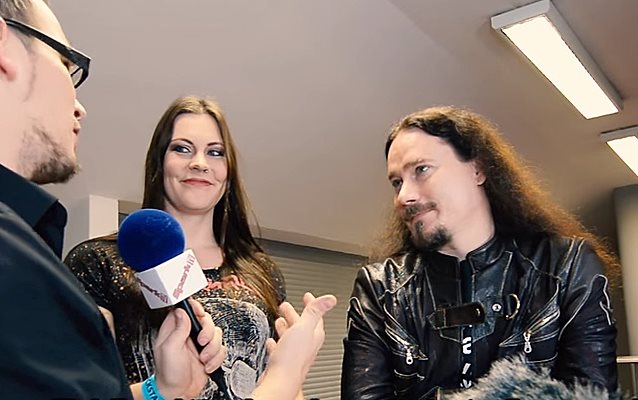 Spark TV, which is part of the Czech monthly magazine Spark, conducted an interview with NIGHTWISH keyboardist Tuomas Holopainen and lead singer Floor Jansen on December 7 in Prague, Czech Republic. You can now watch the chat below.

Asked if he thinks NIGHTWISH is at its "highest level" right now, Tuomas responded: "Personally, I think that when it comes to the chemistry of the band and the music in itself, yes, I really think so. Playing 'The Greatest Show On Earth' live and seeing all the screens and the pyros and the whole show, that really is the peak of the career of the band."

Regarding what has changed for her since she joined NIGHTWISH, Floor said: 'Well, I mean, everything. [Laughs] Everything changed. But I find myself in a group where I can be a hundred percent myself. I feel appreciated. I feel I can be as funny as I think I am, and it matches with the humor of the rest of the guys. We can laugh about each other — silly jokes all the time — which is great; you need to feel that in a group. [You] feel confident that you can play these songs as they should [be played], tell the story as they should. Those things, yeah, they were there from the get-go when I joined, but we really grew into the next level, I think. And what Tuomas talked about [earlier in the interview], it feels there's something going on in the group and the vibe and everything that's just really, really great, and, yeah, it's a great magic to be a part of."