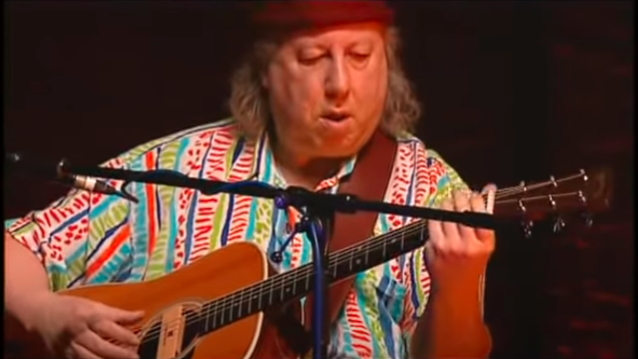 FLEETWOOD MAC co-founder Peter Green has died at the age of 73.

His family confirmed his death in a statement released by solicitors Swan Turton, who are acting on their behalf.

"It is with great sadness that the family of Peter Green announce his death this weekend, peacefully in his sleep," the statement reads. "A further statement will be provided in the coming days."

Green co-founded FLEETWOOD MAC with Mick Fleetwood and Jeremy Spencer in 1967 and wrote one of the band's biggest hits, "Albatross". He left FLEETWOOD MAC in 1970 and was eventually diagnosed with schizophrenia.

This past February, a number of artists, including METALLICA guitarist Kirk Hammett and AEROSMITH singer Steven Tyler, performed at an all-star tribute concert to Green at the London Palladium. The show took place just a few weeks after it was announced that Hammett was collaborating with Green on a book and music project for Rufus Publications. Hammett was at Abbey Road Studios in London in January to record "something very special" for the project, which will feature guest appearances by several other artists. In addition, Hammett posted a couple of photographs with Green, including one image where Peter can be seen holding a vinyl copy of METALLICA's "Master Of Puppets" album and another where they are both holding Green's legendary 1959 Les Paul guitar — known as "Greeny" — which Hammett now owns.

Green, along with seven other members of FLEETWOOD MAC — Fleetwood, Spencer, Stevie Nicks, Lindsey Buckingham, John McVie, Christine McVie and Danny Kirwan — was inducted into the Rock And Roll Hall Of Fame in 1998.

An Artist I Truly Loved & Admired…From The First Time I Heard Him…I Supported The Original Fleetwood Mac At Redcar Jazz Club When I Was In A Local Band…He Was A Breathtaking Singer, Guitarist & Composer…
I know Who I Will Be Listening To Today…RIP https://t.co/VvkGaY6ZMf

RIP Peter Green. One of the absolute hierarchy of the original British Blues Greats. Clapton, Page, Beck and Green. https://t.co/nKBHLcjcwu

What a sad day. #PeterGreen has passed away. When he replaced Eric Clapton in John Mayall's #Bluesbreakers you knew he was special. #FleetwoodMac album #thenplayon was a revelation. So glad I saw his last ever show with FM at the #fillmoreeast June 1971! A true legend.

Shocked to hear about Peter Green’s death. He was an extraordinary guitarist and a great influence...

Most sadly have lost one of the most tasteful guitar players ever I have always been a huge admirer of the great Peter Green may he rest in peace.

Sad to hear of Peter Green passing- one of the greats. RIP. pic.twitter.com/OUHg3KwnNy

RIP Fleetwood Mac's PETER GREEN... I met him several times when I owned 'Rock City' a recording studio in Shepperton in the '80's pic.twitter.com/xjb8Mi9nGz

Peter Green - thank you for everything. pic.twitter.com/0dRpM4Luj9