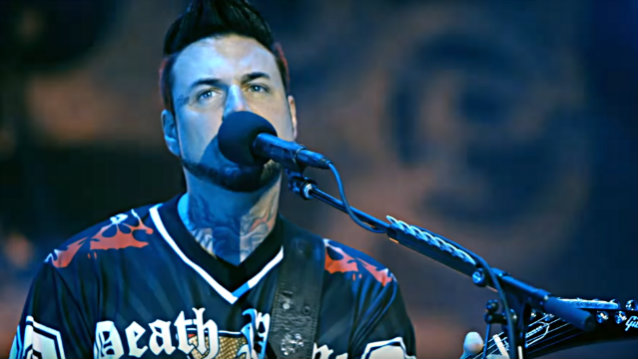 FIVE FINGER DEATH PUNCH guitarist Jason Hook will have a small role in an upcoming movie called "Z", writer-director Jonathan Wright's thriller about a couple that gets in over their heads with a serial killer. Hook will play the part of an FBI agent in the Sony Pictures project, which is being filmed in Ottawa, Ontario, Canada with Michael Baker and Jeff Sackman producing.

According to Deadline, the story follows a down-on-their-luck couple young who discover a serial killer's film reels. They decide to take the law into their own hands, risking everything for the chance at a $100,000 reward. It isn't long until they find themselves in the killer's lethal cross-hairs. Shane West plays blue-collar husband Mick Branson, who can't seem to get ahead in life. Stressed, broke and with very little chance of escaping a lifetime of poverty, he's willing to do just about anything for his true love, even if it puts his life in jeopardy.

It was revealed in April that FIVE FINGER DEATH PUNCH's label, Prospect Park, filed a lawsuit against the band, accusing it of allegedly trying to violate its recording contract by rushing to make a new album despite the addiction problems of Ivan Moody.

The group fired back, calling the suit "the latest in a long line of exploitative and abusive bullying tactics used by our former manager and current label CEO Jeff Kwatinetz to extract money from and wield power against the band."