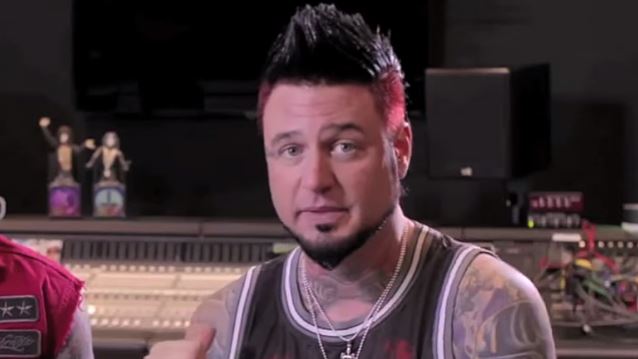 Scotty Mars of "The Scotty Mars Show", which airs on the Live 105 radio station in Halifax, Nova Scotia, Canada, recently conducted an interview with FIVE FINGER DEATH PUNCH guitarist Jason Hook. You can now listen to the chat using the SoundCloud widget below.

Asked whether FIVE FINGER DEATH PUNCH considered forming its own record label and just signing a distribution deal before inking its recent North American deal with Rise Records, Hook said: "Of course that's where I think a lot of bands lean. But the nuts and bolts of it is that it takes a good, focused team to do all of the things that need to be done for a record and its cycle. And we're not delusional about knowing that a good team and a good label is just healthy and good for us. And Rise, it's a very hard-working, no-bullcrap, focused label, and they work hard.

"I mean, let's face it: we could have basically picked anybody," he continued. "We had offers across the board from every label. And we were, like, 'We don't want the Los Angeles, too-cool-for-school bigshots.' We want somebody that's more, like, gets up and goes to work every day and isn't looking for lifestyle party; we want a label full of people that are really as hard-working as we are.

"We had a very thorough screening process. Our manager did the due diligence and gave us his recommendation. And then we came to a joint decision that Rise Records is a very hard-working, focused group of people, and they were our choice. And they've been fantastic so far. And we're looking forward to our future with them."

Hook also talked about the fact that FIVE FINGER DEATH PUNCH has already commenced work on a new album, even though it's only been ten months since the release of "Got Your Six".

"I guess we accept that everybody has to get up and go to work. And we love what we do, so it doesn't really feel like work," he said. "But I don't know why. We're hyper individuals and we like to be productive. And the other part of that, too, is that we have to tour so much that there really is only a certain amount of time available to do recording. So even though it may sound premature, it's not coming out this month — it's gonna come out next year — but we have to fit in some of that work now, because this is the only gap we have."

FIVE FINGER DEATH PUNCH's first album with Rise Records, the BMG-owned rock label, will be released following the completion of the band's obligation to its current label, Prospect Park.