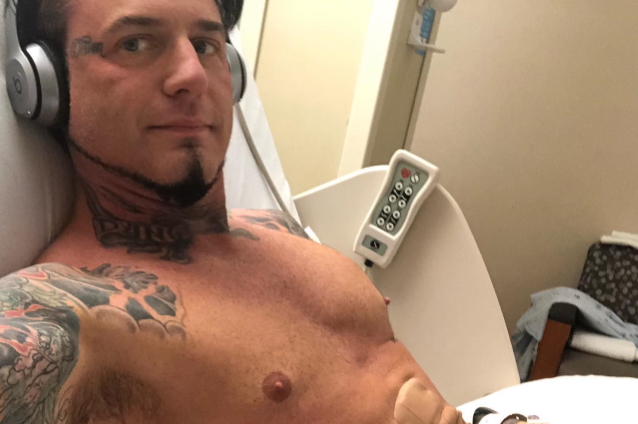 FIVE FINGER DEATH PUNCH's Jason Hook has thanked fans for their support after undergoing surgery to have his gallbladder removed.

Late Friday night (December 13), Hook took to his social media to share a post-surgery photo of him in a hospital bed and included the following message: "Well that sucked! Gallbladder went #kaput ... sorry Duluth MN, some things you just can't control... We'll be back to kick some ass, and make up the other dates as soon as we can! I very much appreciate all the kind notes of caring and support one thing I know for sure is we have the greatest fan base of all time! Long live the #knuckleheads ~ Hook #fivefingerdeathpunch @5fdp"

A representative for FIVE FINGER DEATH PUNCH told TMZ that the guitarist had been experiencing pain that prompted two visits to the emergency room. Finally, during a third ER visit, doctors determined Jason needed to have his gallbladder removed due to blockage.

FIVE FINGER DEATH PUNCH has since issued a statement saying that Jason "will have to remain in the hospital until his doctors determine he is fit to be discharged and travel home."

The band added: "Jason's healing is our #1 priority. As a result, the last three shows of this current tour will be postponed, however, we are working on coming back to play Duluth, Omaha and Des Moines very soon. Once we have an update on new dates to return, we will post the information on our website and social media channels. Please hold on to your tickets in the meantime. Jason very much appreciates all the well wishes and, rest assured, we will see you back out on the road very soon!"

The band recently announced the dates for a new spring North American tour. The trek kicks off on April 8 in Sunrise, Florida, winding down on May 20 in St. Paul, Minnesota. PAPA ROACH, I PREVAIL and ICE NINE KILLS will join FIVE FINGER DEATH PUNCH on the upcoming road trip.


Well that sucked! ? Gallbladder went #kaput ... sorry Duluth MN, some things you just can’t control... We’ll be back to kick some ass, and make up the other dates as soon as we can! I very much appreciate all the kind notes of caring and support ?? one thing I know for sure is we have the greatest fan base of all time! Long live the #knuckleheads ?? ~ Hook #fivefingerdeathpunch @5fdp