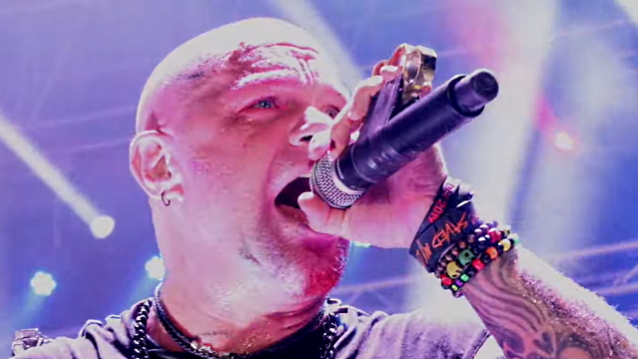 FIVE FINGER DEATH PUNCH has uploaded a new video blog from the road. The four-and-a-half-minute clip features footage from the band's July 16 concert at Ozarks Amphitheater in Camdenton, Missouri, including video of frontman Ivan Moody singing the national anthem to the hundreds of servicemen and women in the crowd and gifting one of his microphone stands to a cancer survivor.

FIVE FINGER DEATH PUNCH guitarist Zoltan Bathory recently said that the band's new LP could be its best yet. He said: "We have a little pie that we belong to in the musical spectrum, and within that, the grooves — there are these big, nasty grooves that feel just heavier and grimier, and that's kind of what's happening. The energy of what's in the band now is affecting this process."

He said the band is taking their time making the album and stated: "It will be what it will be. At the end of the day, we are in a fortunate situation where we can take as long as we want to. We can be in the studio forever if we wanted to."

According to Bathory, the recording process is going "way smoother and faster" than usual.

The drums on the disc were laid down by Charlie "The Engine" Engen, who made his live debut with the group during its fall 2018 tour with BREAKING BENJAMIN. He stepped in for original drummer Jeremy Spencer, who left the band in December due to a back injury.