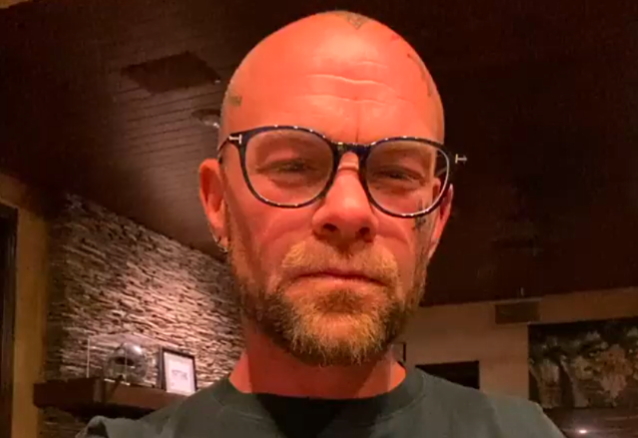 FIVE FINGER DEATH PUNCH singer Ivan Moody has weighed in two of the biggest hot-button issues facing the U.S.: the government response to the coronavirus pandemic, and the alleged murder of a black man who died while in a Minneapolis police officer's custody.

Late Thursday night (May 28), Moody shared a five-minute Instagram video message in which he began by discussing COVID-19 crisis, which has killed more than 100,000 Americans and devastated the economy.

"What's up, everyone. So as we sit here holding our breath collectively, I figured I'd be the one falling on the sword at this point," he said.

"First off, COVID-19 exceeding a hundred thousand deaths here in the United States. I'd like to send my condolences to the families. And to the essentials and to the first responders, I'd like to send my respect and my love. I'm sure I speak for thousands when I say we appreciate you're going through and do.

"I'd also personally like to say that I believe that our government — left and right — right now is failing us," he continued. "The country is opening up, I believe, prematurely, and anybody who doesn't see that, I also believe, is oblivious to the fact that this is affecting thousands and thousands of families and lives.

"All of this can be avoided with small preparations — things that were taken for granted," he added. "Some of us do it, I'm assuming, because we're just naïve to the fact of human life, I guess. I don't understand it, and I don't see why any of us would look to the people we put in power, at this point, to lead the way when it seems as if they can't lead themselves.

"Again, I'm aware that I'm gonna catch heat for saying most of this, but I believe in my heart it needs to be said."

Moody also condemned the killing of George Floyd, an unarmed black man, by Minneapolis law enforcement officers, and spoke out against police brutality.

Floyd died on Monday (May 25) as police arrested him outside a convenience store on a report of a counterfeit bill being passed. The 46-year-old was seen on a bystander's video gasping for breath during an arrest in which an officer knelt on his neck for almost eight minutes. In the footage, Floyd is heard pleading with officers, "I cannot breathe... Don't kill me," while the officers ignore his pleas. He eventually stops talking and moving.

"When it comes to the situation in Minnesota, anyone who's seen that film that doesn't believe that those men should be in shackles awaiting trial for murder charges?" Moody said in his video. "I don't think I have to say anything. This is an obvious fucking need for justice. This is something that can't be overlooked. No longer is it geographical either; it doesn't just pertain to one city. This is a national fucking problem, and it needs to be addressed immediately.

"I come from a household and a family of people that people are people. There isn't a definition of a person from their color or from their race, their ethnic background or their religions. We are American, and we stand as so. So this injustice needs to be rectified immediately.

"To those of you that are rioting out there right now, or are thinking of doing so, remind yourself that there are a million cops out there right now who have their head in their hand, going, 'What the fuck?', because they started doing what they're doing with the right intentions. They're good people, they're honorable police, and they would never do such things. So please don't hold to account an entire section of American people for the few that are really fucking this up.

"So, my condolences to the family and to those whose are affected by this. I truly apologize and I hope that justice is served."

Later in the video, Moody threw his support behind families who are struggling financially as a result of business closures in the wake of the coronavirus pandemic.

He said: "To all the men and women out there trying your hardest just to bring food to the fucking table right now, I know your struggle; I've been there. And as a parent, I know how fucking painful this is right now, trying to supply our children with answers, between home schooling and providing and parenting in general and just being good people. My heart and my hat is off to you. We're in this together — straight up. I'm not just saying that — we are."

Ivan closed the video by clarifying that "these are all personal opinions. These have no weight when it comes to anyone else in my band or anyone in my family," he said. "These are things that I just feel need to be said."

FIVE FINGER DEATH PUNCH's latest album, "F8", was released in February. The follow-up to 2018's "And Justice For None" caps a turbulent period for FIVE FINGER DEATH PUNCH in which Moody finally got sober after a near-fatal struggle with addiction, while co-founding drummer Jeremy Spencer bowed out of the band due to physical issues.