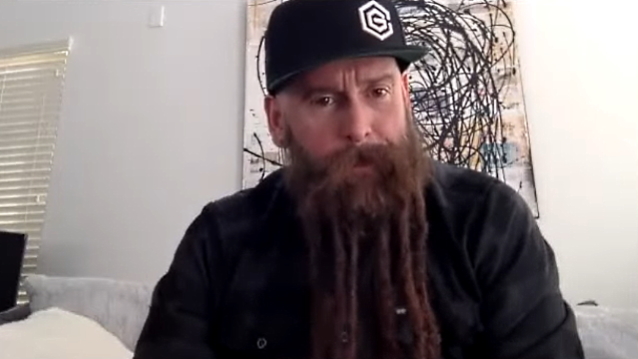 During a new appearance on MACHINE HEAD frontman Robb Flynn's "No Fuckin' Regrets With Robb Flynn" podcast, FIVE FINGER DEATH PUNCH bassist Chris Kael spoke about his decision to get sober three years ago. He said (see video below): "I was doing blow, but I realized when I went to rehab, I was always the key bump guy. So just keeping the levels up just enough to fight any sort of depression. And then also through that time, Ivan [Moody, FIVE FINGER DEATH PUNCH singer] was very much the focus of the issues [with drugs and alcohol] that he was going through at that point. No surprise and no secrets there — we've all seen the stuff that happened back then. But he was the focal point for everybody. So I was kind of able to hide in the background while he was dealing with his stuff. So I got to slide under the radar most of the time.

"The real decline for me started maybe two months before I cleaned up," he continued. "Just life situations — I was going through a divorce at the time… We got divorced after I got out of rehab, but the process had kind of been started before. And honestly, my goal going into rehab was — I wrote [my then-wife] a note; she may still have it; I'm sure she probably does. It was basically, like, 'Hey, I'm going to get help' and become the guy that she married in the first place and not this person I had become. So I very much wanted to get back and get out of rehab and go back to being married and whatnot. But it changed. And it was real bad probably the last three weeks of it. I didn't get too out of control. [There were] a couple of times here and there where I would really let go and there were indications that things were getting worse for me. But I basically ended up in just like a real depressed period, and I decided, 'Fuck, man. I can't do this anymore.' I called my buddy Greg, and he took me to rehab that day. And it was the weakest I've ever felt in my life, walking into that rehab. But then once I got out of rehab, I was, like, that's the fucking strongest I've ever been, is admitting that I can't deal with this and I need to figure something else out.

According to Chris, "life is a whole lot happier" for him now. "I'm more productive," he said. "I've got more things going on. I'm able to appreciate stuff."

Kael went on to say that things got so bad for him at one point that he didn't always enjoy performing live. "When you're on stage at Wembley, sold-out show, and you're on stage going, 'Ah. Can we just get the fuck off here?', something's fucking wrong with your endorphin levels," he laughed. "My body was just so beat up. I never played fucked up on stage, but I definitely played tired from the night before many times. And that was one of those nights. My body was beat up from the night before. We probably had a day off in London. Me and my bass tech used to daydrink all day long."

Back in April 2018, Kael told the KLAQ radio station that he was "going through about an eight-ball of cocaine a week" at the height of his addiction. "That got to be the biggest problem for me," he revealed. "That and depression, the two things, were not good. I didn't realize it until I got into rehab that I was self-medicating with cocaine to get my dopamine levels up to fight the depression. I never even thought about that. And then when you come off it, you crash hard."

Kael first revealed his battle with addiction in a series of tweets, saying that his then-wife played a "major role" in helping him get clean. "Had she not busted me trying to restock after burning through $1300 in blow in two days in late January [2018], I truly believe that I would not be here today," he wrote.