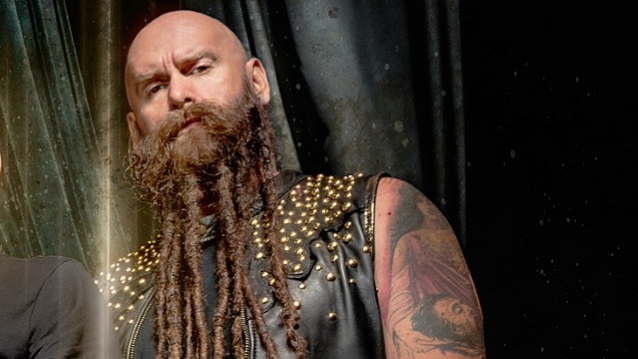 FIVE FINGER DEATH PUNCH bassist Chris Kael recently spoke with Andy Hall of the Des Moines, Iowa radio station Lazer 103.3. You can listen to the entire chat via the SoundCloud widget below. A few excerpts follow (transcribed by BLABBERMOUTH.NET).

Chris: "We are kind of playing it by ear right now. We just got out of a session in the studio in June. This tour that we're on now, is kind of a break in between studio sessions, so we go back in August once we get back to Vegas again. We're writing some great stuff in there. We're in the best mindset we've ever been in, collectively as a band. I can definitely feel that in the studio. Early on in this cycle right now with the recording process, we have got three monsters that we've written and recorded in the studio. Having these three huge beasts in the can already, excited about playing out here live, then getting back into the studio…I can only imagine what the rest of the record is going to be like. Just playing it by ear. I don't know if it's going to be 2019, 2020. I play bass, so I don't get that information. [Laughs] I'm the last to find out, but I'll be out there on the release date picking it up with you guys."

Chris: "We had Jeremy for quite a while, and obviously, you're going to form a bond both musically and personally. Getting Charlie in here — he reminds me a lot of me when I first joined. Really excited, completely professional. He stays true to what Jeremy was playing but adds little small stuff that's his own thing. We're all locking in. I'm telling you, this dude is driven. He's going to be the best drummer in the world. His drum solo that he is doing out on stage right now — I think you can find part of it online right now — he does a drum solo over the 'Stranger Things' theme song, then busts into this crazy, like technical, prog shredding thing at the very end. Dude's amazing. It's fun out there watching him, not only watching his technical prowess, but just seeing just how good of a dude this dude is as a person and seeing him light up onstage. Like I said, he reminds a lot of me of me when I first joined the band and it's good to see it through those eyes again."

On his sobriety, which recently passed the year-and-a-half mark:

Chris: "After a year, I stopped counting days. It feels good. Ivan [Moody, vocals] and I, both of us, have leaned on each other during sobriety and have been pillars for one another. There were many times back in the day where we were ready to throw down, mouths running, alcohol in there, just angry. But now I'd have to say he's probably my best friend out here on the road. We've been good for each other in sobriety. It's a whole different vibe than what it used to be."