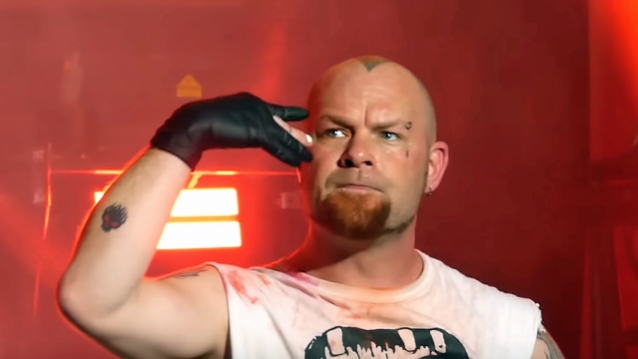 Moody's FIVE FINGER bandmate, bassist Chris Kael, congratulated his friend on the milestone, writing on Instagram: "Join me in celebrating @ivanmoody today on his One Year Sober Birthday! Roughly 75 percent of those who start the path to sobriety don't make it a full year. I've seen firsthand the work that Ivan has done through 365 consecutive days to get himself to this HUGE milestone. I've seen the amazing, positive changes in him over this past year that have gotten closer and closer to the man we all knew he could be. I'm proud of you, my friend. As are countless people you have inspired along the way. Keep that shit up! #ShitYesSon #SoberAsFuck #PresentAsFuck #IvanAsFuck"

Last September, Moody opened up about his struggles with alcohol addiction during an interview with the WEBN radio station. The singer admitted that he was "back and forth for a while; I'd do three months, then relapse." He added: "Recovery, you have to be commited; it's an honest program, and I wasn't being honest with myself at the time. I'm very, very proud of the progress I've made."

Moody went on to credit several of his friends and musical peers with helping him get through some of his darker moments. "Rob Halford [JUDAS PRIEST] is the person that I called a lot of the time when I was in recovery," he revealed. "I think he's been sober now for going on 40 years — maybe, I think, a little longer than that; I could be wrong. But Jamey Jasta [HATEBREED] — another one. Jamey's been sober now for 18 years; Jonathan Davis [KORN]; so on and so forth. So these were all people that I looked to when I was struggling, and I was very, very lucky and blessed to have them on my team."

Ivan said that there has been a significant improvement in his physical and mental health since he gave up the bottle. "I feel I took a nap for about four years and I woke up one day and I saw somebody else wearing my skin," he explained. "It was like Rip Van Winkle; it was really odd. I feel better than I felt in years, which is really… it's a plus."

Back in May 2018, Moody told the Green Bay radio station Razor 94.7 that he nearly died due to an alcohol-related seizure and woke up surrounded by EMTs and his daughter holding him while crying. He also admitted that he went to rehab five times before the last time finally stuck.

Moody revealed that he was sober but massively hung over during his onstage meltdown in Europe in 2017, with the band sending him home after that and later welcoming him back on a "probationary" basis after both Phil Labonte from ALL THAT REMAINS and Tommy Vext from BAD WOLVES filled in on a couple of tours.

Kael himself celebrated his first year of sobriety on February 3.

Moody and Kael are not the first members of FIVE FINGER DEATH PUNCH to publicly discuss their struggle with addiction. Drummer Jeremy Spencer, who left the band in December, got clean and sober seven years ago after a particularly bad episode of drug and alcohol abuse, saying that he didn't want to let his parents down after achieving the kind of success he dreamed of as a kid.

FIVE FINGER DEATH PUNCH's seventh full-length studio album, "And Justice For None", came out last May.

Join me in celebrating @ivanmoody today on his One Year Sober Birthday! Roughly 75 percent of those who start the path to sobriety don’t make it a full year. I’ve seen firsthand the work that Ivan has done through 365 consecutive days to get himself to this HUGE milestone. I’ve seen the amazing, positive changes in him over this past year that have gotten closer and closer to the man we all knew he could be. I’m proud of you, my friend. As are countless people you have inspired along the way. Keep that shit up! #ShitYesSon #SoberAsFuck #PresentAsFuck #IvanAsFuck