In other news, FIVE FINGER DEATH PUNCH is celebrating the RIAA (Recording Industry Association Of America) platinum certifications of its "American Capitalist" (2011) and "The Wrong Side Of Heaven And The Righteous Side Of Hell, Vol. 1" (2013) albums.

The first single from "A Decade Of Destruction", a brand new song called "Trouble", has already seen great success as it hit #1 on the iTunes Metal and top 5 positions on the Rock charts around the globe. Additionally, the song has racked up over two million streams worldwide in just a few weeks making it the band's biggest streaming debut for a lead track.

FIVE FINGER DEATH PUNCH has amassed a total of over two billion streams worldwide to date and is currently overseas co-headlining this fall's biggest European arena rock tour with IN FLAMES and special guest OF MICE & MEN. The tour is headed over to Germany, Austria, Spain Belgium and Holland next before concluding at Wembley Arena in London, U.K. on December 21, just in time for the holidays.

Drummer Jeremy Spencer told Razor 94.7 that he was unsure about doing a greatest-hits LP at first, saying, "I was, like, 'Do we even have enough hits?' And then we looked and we have, like, thirteen or fifteen radio hits. It just seems like it just started, even though it's been ten years. We're always wrapped up in our vacuum, in our cocoon of our daily life, so you don't pay attention to that stuff. And now we're, like, 'We have a greatest hits.' And the label thought it was the right time, so we were, like, 'Cool. Let's put some new songs on it, though.' We don't wanna make… 'Cause people can pretty much… You know, they have the records already. But now this is a cool package with different stuff on it. The artwork's really rad. It's cool."

The hits collection and an already-completed new studio album are part of a deal to settle a legal dispute and close out the band's contract with its label, Prospect Park.

FIVE FINGER DEATH PUNCH's seventh full-length LP, which was finished a year ago, will follow up 2015's "Got Your Six" and will be released in spring 2018. 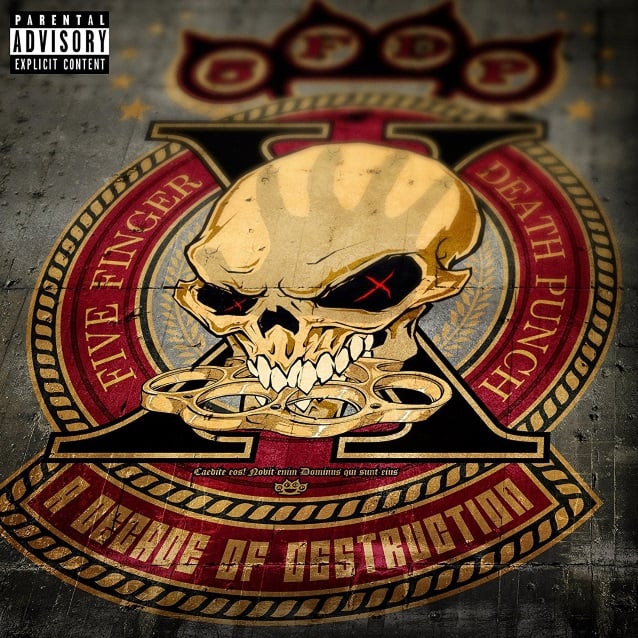