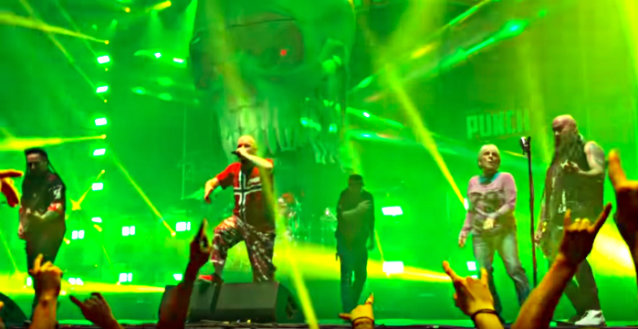 FIVE FINGER DEATH PUNCH was joined by an elderly lady on stage during the band's concert in Oslo, Norway.

The American heavy metal outfit was performing the song "Jekyll and Hyde" at the Oslo Spektrum last night (Saturday, November 18) when singer Ivan Moody motioned for a special guest on the side of the stage to step out and stand alongside him and his bandmates.

After enthusiastically accepting the invitation, the woman ended up spending three minutes on stage with the members of FIVE FINGER DEATH PUNCH, dancing and playing air guitar to the track. She closed out her appearance by having her arms raised by bassist Chris Kael in appreciation of her efforts before getting a warm hug from Moody.

The band later tweeted a video of the joint performance, writing in an accompanying caption: "Highlight of the night... Special Guest 'Heavy Metal Grandma' - we found this 70 years old lady rocking out in the first row ... She is more metal than you"

FIVE FINGER DEATH PUNCH is currently taking part in the biggest European arena rock tour of the fall. They are on the road co-headlining with IN FLAMES and special guests OF MICE & MEN.

FIVE FINGER DEATH PUNCH's follow-up to 2015's "Got Your Six" album is tentatively due in April or May of next year.

Prior to the arrival of FIVE FINGER DEATH PUNCH's new full-length disc, the band will release a greatest-hits collection, "A Decade Of Destruction", including two new tracks, "Trouble" and "Gone Away".

The hits collection and the already-completed new studio album are part of a deal to settle a legal dispute and close out the band's contract with its record company, Prospect Park.

Highlight of the night... Special Guest "Heavy Metal Grandma" - we found this 70 years old lady rocking out in the first row ... She is more metal than you ????? #heavymetalgrandma #airguitar #doubledevilhorns #LEGEND pic.twitter.com/QDE5Tj2Jfk