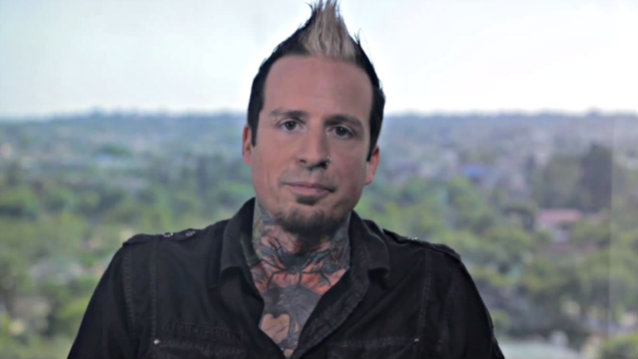 FIVE FINGER DEATH PUNCH drummer Jeremy Spencer believes that radio support is essential to a band's success these days and he credits radio airplay for helping each one of the first three FIVE FINGER albums go gold in the U.S. for sales of 500,000 copies or more.

"I've certainly seen a share of negative comments about, 'This band is just a sell-out band. They're fabricated. It's a radio band. A major label put them together,'" Jeremy told Live Metal in a recent interview. "It was never like that for us. We're on an indie label. It's us and KORN; we're the only two bands [on the label]. We were the only band forever on this label. We made a record [2007s 'The Way Of The Fist'] before we had any help at all. [Guitarist] Zoltan [Bathory] and I started tracking the record before we even had a full band. So we just did everything we wanted to do. I thought we made a record that was what I wanted to hear and what I wanted to play. It became obvious that after 'The Bleeding' broke at radio, they were, like, 'We would love to play something else, but we can't exactly play 'The Way Of The Fist', because [laughs] it's all double bass and F-bombs.' They're, like, 'It would be great if you could have something else to play.' It was this weird spot for us, but we just decided, 'Hey, let's write something that we like that could still work for what they're asking for.' So we came up with 'Never Enough', which is one of our fan favorites, especially when we play it live. It sounds like DEATH PUNCH, yet it's not brutal enough to where they're not gonna play it."

He continued: "It's important these days to have radio supporting you because it helps set up your tours and it just brings more awareness to everything that's going on.

"It's really tough to sell records these days. It seems like the bands that are having success at radio are definitely selling more records. But it's actually not always the case, because I see some bands that have Number One singles that sell 60,000 copies of their album. So it just depends on the situation, but I've definitely found that since we've had a lot of success and push at radio that a lot more people have heard of our band, especially when we released 'Bad Company', that cover. That's when awareness of the band went way up."

Despite releasing two albums' worth of material last year, FIVE FINGER DEATH PUNCH is already looking toward its next studio project. Spencer told Artisan News, "We're at the studio right now, and we're recording some new material. And after we finish the [fall North American co-headlining] tour with VOLBEAT, we're gonna go back in and try to finish up everything in the winter and then get something out late spring [or] early summer."

Spencer added that the band has demoed four songs so far, saying, "I'm liking what I'm hearing, but there's a long way to go… We'll judge the body of work when it's done."

Asked how FIVE FINGER is going about following up last year's "The Wrong Side Of Heaven And The Righteous Side Of Hell" albums. Spencer told Live Metal: "Well, now we're gonna do three records! [laughs] No. We're just gonna do what we do. We always write what we feel at the time. You can't get caught up in trying to worry about, is this gonna sell more or is this gonna be better? I've certainly gone through that already. After 'War Is The Answer', following up with 'American Capitalist', there was a lot of pressure. It was self-induced more than anything, and I realized it's a waste of energy to worry about that stuff. Just write the best songs you can that are as honest as possible and that you like to listen to, and the rest will take care of itself. That's just kind of how we approach it."

FIVE FINGER DEATH PUNCH released "The Wrong Side Of Heaven And The Righteous Side Of Hell" in two parts last year, with the first arriving in July 2013 and the second following last November. The first half alone has sold more than 414,000 copies in the U.S.