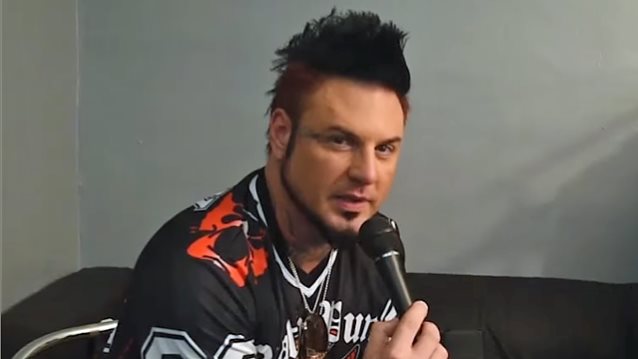 Jason Hook says that everyone who has heard FIVE FINGER DEATH PUNCH's upcoming album thinks it's the band's strongest effort to date.

FIVE FINGER DEATH PUNCH delivered its follow-up to 2015's "Got Your Six" to the band's longtime record label Prospect Park several months ago, but a legal battle with the company has delayed the disc's release.

Speaking to SpazioRock before FIVE FINGER DEATH PUNCH's June 6 concert at Alcatraz in Milan, Italy, the guitarist stated about the upcoming LP (see video below): "It's completely done. There was sixteen songs completed, sitting at Prospect Park, ready to go. Everybody that's heard the record so far thinks it's our best record. I'm super excited about it. I thought we fucking knocked it out of the park. There's some really cool, different things on there that are slightly different for us. There's certainly a chunk of what you would expect from FIVE FINGER DEATH PUNCH, but there's some solid songs that are slightly outside of our regular box. But everyone thinks it's a smash, and it's in their control."

According to Hook, FIVE FINGER DEATH PUNCH's new album finds the band once again walking the fine line between subtle experimentation and continuing with the tried-and-tested formula which has turned them into arena headliners.

"We can't really do anything differently," Hook admitted. "We are what we are. And it's an interesting challenge, because when you get to your seventh or eighth or ninth record, it comes naturally to do what we do. So we can't be fake about it, we can't fabricate something that's different — we have to just do what comes naturally. Fortunately, when we're making records, you have to come up with sixteen or so songs, so you can do a little bit of experimentation and try to break outside the box a little bit. Sometimes it doesn't work. Sometimes it's, like, 'Okay, that's way too fucking different.' But it's very easy for us to come up with the bulk of our sound in sixteen songs. And I think you'll be very delighted. It's a powerful record."

FIVE FINGER DEATH PUNCH in April filed a new lawsuit against Prospect Park, asking a judge to release them from their contract with the label and to order the company to pay more than a million dollars in damages.

Prospect Park told TMZ the real issue was the band still hadn't delivered the album "required under the recording contract and expected by their fans."

Hook talked about FIVE FINGER DEATH PUNCH's legal issues during the SpazioRock interview, telling the site: "The whole lawsuit thing, to me, is just so silly. We haven't done anything wrong. People always ask me, 'Why are you getting sued by your label?' I'm, like, 'I can't honestly answer that. I don't even know why.' We owed the label one record, which we completed within the terms of the contract. We didn't anything too soon. Twelve months after 'Got Your Six', we had another record ready, and we submitted it, and they refused to release it because we've already signed to another label to move on with our lives."

The guitarist also blamed Prospect Park CEO Jeff Kwatinetz personally for delaying the new FIVE FINGER album release, saying: "This Jeff Kwatinetz character has sued 89 people so far; that's his thing. So we'll never stop fighting. He won't win. We have millions and millions of people that demand us to come and play. There's plenty of money. What he's done is just kind of childish and ridiculous."

The label sued FIVE FINGER DEATH PUNCH more than a year ago for breach of contract, alleging that the group wanted to rush the recording of a new album without proper creative input from the label and in order to "cash in" before the anticipated "downfall" of singer Ivan Moody, who was revealed at the time to be in rehab. In addition, Prospect Park wanted more time to promote "Got Your Six", and asked the band to provide just two new songs for a greatest-hits collection in the interim.

According to Prospect Park's original lawsuit, FIVE FINGER DEATH PUNCH's four-album contract prohibited the band from beginning to record a new effort until at least nine months have passed since the release of the previous one.