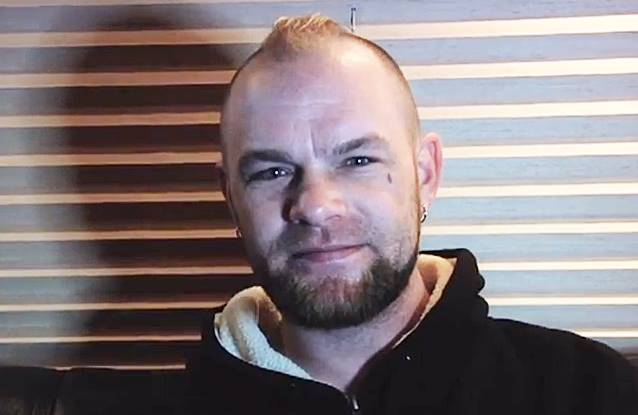 According to The Pulse Of Radio, FIVE FINGER DEATH PUNCH has posted the fourth of five webisodes online discussing the making and meaning of songs on its upcoming album, "The Wrong Side Of Heaven And The Righteous Side Of Hell - Volume 2". In the latest clip, singer Ivan Moody reveals that the track 'Wrecking Ball" comes from his own personal experience. He explains, "Everyone who knows me or has heard rumors or stories or whatever knows that I have a tendency to lose it every now and then. I've never been shy about it either. So that song encompasses the other Ivan, the monster."

Moody told The Pulse Of Radio that writing personal lyrics can be a double-edged sword. "On some scales it's really cool, because I get to wear my life and my emotions and every feeling and thought that I have out on my sleeve," he said. "But in the same time, it's a little overbearing sometimes because you do give so much of yourself to people that don't know you and you have awkward situations arrive, you know, where somebody walks up to you and they're like, 'Oh, dude, I totally get it, you know, you're the man,' and you just look at 'em like, 'You really don't know me beyond what you've heard on the CD.'"

Also in the clip, guitarist Zoltan Bathory confesses that the band gave Moody a hard time during the recording of the song just to get him in the right mood, while guitarist Jason Hook shares more on the writing of the music.

"The Wrong Side Of Heaven And The Righteous Side Of Hell - Volume 2" will be available on November 19.

The first volume came out on July 30 and debuted at No. 2 on the Billboard album chart.

FIVE FINGER DEATH PUNCH does not have any current U.S. tour dates on its schedule but will begin a European run with AVENGED SEVENFOLD in early November.