FIVE FINGER DEATH PUNCH drummer Jeremy Spencer will sit out the fall leg of the band's tour with BREAKING BENJAMIN to undergo a second back surgery. Drum prodigy "The Engine" will fill in for him on all dates beginning on November 6 in Wichita, Kansas and ending on December 11 in Portland, Maine.

Produced by FPC Live (Frank Productions), the fall arena tour will once again feature 2018 breakout rock band BAD WOLVES (select dates) with Swedish heavyweights IN FLAMES on other select shows. FROM ASHES TO NEW will offer support on all fall dates, while special guest Trap-Core DJ Felmax will bring his heavy beats to round out the night of entertainment.

For the fall tour, FIVE FINGER DEATH PUNCH will donate a portion of their ticket sales to VETPAW (Veterans Empowered to Protect African Wildlife). The mission of VETPAW is to end the illegal poaching of rhinos, elephants and other endangered species. VETPAW does this by utilizing the unrivaled skills and experience of highly trained combat veterans to form anti poaching units, train local park rangers and support their communities.

BREAKING BENJAMIN will donate a portion of ticket sales to a charity the band has longtime supported, St. Jude Children's Research Hospital, in an effort to help further research to end childhood cancer and other life-threatening diseases. 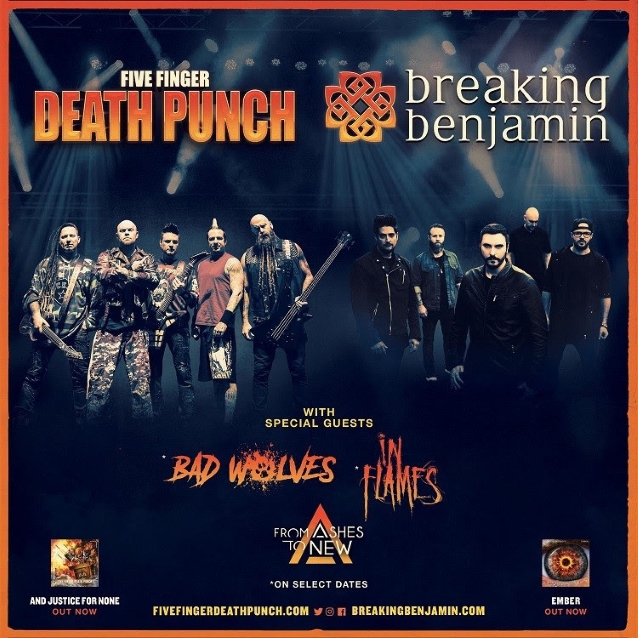