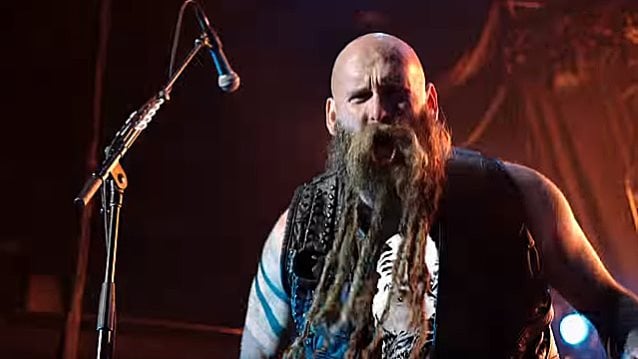 Metalshop TV conducted an interview with FIVE FINGER DEATH PUNCH bassist Chris Kael prior to the band's November 26 concert at Forum Karlín in Prague, Czech Republic. You can watch the entire chat below. A few excerpts follow (transcribed by BLABBERMOUTH.NET).

Chris: "You know, it's one of those things that DEATH PUNCH, we are what we are. Six records into it, now seven, we've kinda got our thing, got our sound, our tones, the themes for the songs and whatnot. There are some little kind of different departures on this record, but I wouldn't say we've gone and changed the sound. Five gold records, one platinum record, why would you stray from that kind of sound when those people have been out there supporting you the whole time and come to expect 'that sound' from us?' It's all about great songs. That's what we try to do. We're always trying to find that perfect song. I think each record, we get closer and closer and closer to that elusive perfect song."

On the recent issues the band has faced, including singer Ivan Moody's ongoing battles with alcoholism and legal disputes with their record company, Prospect Park:

Chris: "With the release of the ['A Decade Of Destruction'] greatest-hits record, we got everything settled and ready to go. It's nice to be able to get two brand-new songs on the greatest-hits that you're going to get December 1. Because we took two songs from the full-length and added those to the greatest-hits, we had to go back into the studio and do two brand-new songs. One of those songs is one of the most aggressive songs we've done. It [has a] nice stomp, four-on-the-floor, Ivan is angry just like he's always been."

On the current state of Moody:

Chris: "I had a shitty attitude when he left [the European tour in June]. I was fucking pissed about the whole thing, but I understood he had to go get his stuff taken care of. When he came back, I really wasn't sure what to expect. I had a bad attitude about it, too. I've talked to him about this. We chatted it out over coffee at the Hard Rock [Café] the other day, talking about all the feelings that were involved with that. Kind of a little 'band therapy,' not quite 'Some Kind Of Monster' therapy [referring to METALLICA's 2004 documentary], but we were talking about it. I had attitude, I had a bad taste in my mouth. When I first saw him in that dressing room back in the States for the first festival date, even before we got onstage, I was, like, 'Something is different about this guy now.' It made me relax a little bit. I was, like, 'All right, I'm not going to be so aggressive. I'm not going to bust his ass like I wanted to.' Then he got onstage and his voice was just… [as] soon as those first notes came out and his attitude and his energy, I was, like, 'That's Ivan Moody. That's the beast that fronts this band.' He's back and things are great. We're getting along like we ever have in quite some time. The last three years were a little tumultuous. As dangerous as we were when we're volatile, I think we're even more dangerous when we're focused and stable."

On whether he follows any newer metal bands:

Chris: "I am currently waving the flag for CODE ORANGE right now. Love that band. They're a band out of Pittsburgh, Pennsylvania, young kids, good energy, probably the most intense, active stage show I've seen in quite some time. All good people. Any time they're playing anywhere near me, I drive to go see those guys. So, I love CODE ORANGE. BAD WOLVES, [one-time FIVE FINGER DEATH PUNCH fill-in vocalist] Tommy Vext is out here as well with us, helping us get our 'training' on, so he's working on getting BAD WOLVES out there. It's a great sound. Great people in that band as well, friends of ours. CODE ORANGE is really the one that's a new band that I'm really into. Any time I find something new, I always talk about it on Twitter and Instagram and all of that stuff. I'm very big into supporting up-and-coming bands. I remember when I was growing up, METALLICA, they would always wear MISFITS shirts. I was, like, 'I haven't heard that band. I'm going to give it a shot.' Going into this, I had the idea of wearing band shirts I liked because I knew people would be looking at DEATH PUNCH and would be looking for new bands, so anything you see me wear, it's a band I support and try to help them get the word out that they're out there, too. Open them to new audiences. When I first joined the band, it's funny, I'm a huge fan of OBITUARY and DEICIDE and all that stuff, and I would wear those shirts. And people on Blabbermouth would be, like, 'I hate that band, but the bass player looks cool. But, I don't know…' All because I like OBITUARY, I guess."

"A Decade Of Destruction" was released on December 1. The set includes two new songs, "Trouble" and a cover of THE OFFSPRING's "Gone Away".

The hits collection and an already completed new studio album are part of a deal to settle a legal dispute and close out the band's contract with Prospect Park.

FIVE FINGER DEATH PUNCH's seventh full-length LP, which was finished a year ago, will follow up 2015's "Got Your Six" and will be released in spring 2018.