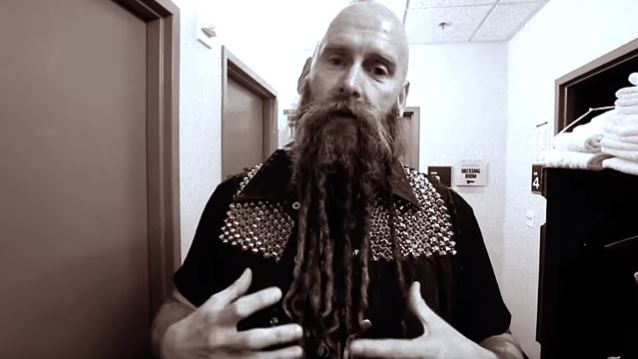 FIVE FINGER DEATH PUNCH bassist Chris Kael says that he became sober after the events of November 13 in Paris, France, when more than 129 people were killed in seven coordinated terrorist attacks.

During an appearance on the December 1 edition of the "Let There Be Talk" podcast with rock and roll comedian Dean Delray, Kael said that he never battled a serious drug addiction, but admitted: "I'm recently sober. Actually, Paris… when the Paris thing happened, I cut everything off. I've been sober since then."

Regarding his reasons for quitting drinking, Kael said: "Alcohol is one of those things where… I don't really consider myself an alcoholic, but I do make some fucking stupid decisions once the alcohol hits me."

He continued: "My wife certainly never liked it. A lot of it was for her too. She's much smarter than me, much more disciplined than me, and was trying to get me to do it for a long time. And then finally, when Paris happened, I basically had a breakdown that night. I mean, it hit me hard. I was drinking, I'd done a couple of Adderalls [a drug that treats ADHD by increasing focus and attention span] and pffft… spiraled that night. And anybody that knows me from social media would have no idea that I did any of that stuff. They'd know me as kind of a drinker, but I put up a good front."

Kael denied that he was ever abusing prescription pills, explaining that he "just happened to do it that night." He also revealed that his heavy drinking was beginning to negatively affect his workout regimen. He said: "That was the thing. That was always my thing. I was, like, 'Fuck, if I'm still making the gym, I'm doing okay.' And then there were days… I have a trainer here in Vegas. I'd be out drinking whisky the night before and go do heavy chest and back the next day, and as he spotted me doing bench presses, I'd just see his face. I'm, like, 'I know I smell like a bar right now.' So that kind of did it too. I was putting so much work into working out and then putting all those empty calories in at the end of the night. It wasn't making any sense for me. It just wasn't working anymore."

Even though Kael is only less than a month sober at this point, he said: "I feel like I'm just getting over that hump. There have been times, over the last year, probably, where I've tried to quit. Like I said, I'm at the point now where I finally feel like I'm kind of turning that corner, and I don't really have the cravings too much anymore. It's more like a social thing for me. That's the thing, too. When you're out in a band, alcohol is everywhere; everybody's hanging out, partying. And it's, like, 'Ugh!'"

FIVE FINGER DEATH PUNCH canceled a show in Milan, Italy on November 22 amidst rumors that the Islamic State (ISIS) was planning to attack the show as part of a series of multiple attacks spread across several countries.