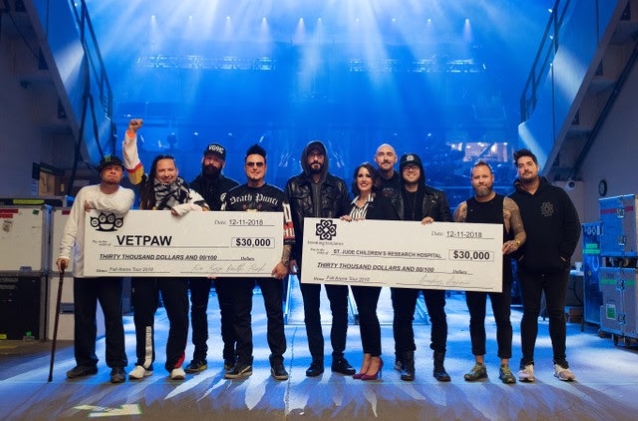 This past Tuesday (December 11), FIVE FINGER DEATH PUNCH and BREAKING BENJAMIN wrapped the fall arena portion of the biggest North American co-headlining rock tour of 2018. The bands announced today they have chosen to donate a portion of their ticket sales this fall to two charity organizations close to their hearts. FIVE FINGER DEATH PUNCH has donated $30,000 to VETPAW (Veterans Empowered to Protect African Wildlife). The mission of VETPAW is to end the illegal poaching of rhinos, elephants and other endangered species. VETPAW does this by utilizing the unrivaled skills and experience of highly trained combat veterans to form anti-poaching units, train local park rangers and support their communities. Meanwhile, BREAKING BENJAMIN has donated $30,000 to a charity they've supported for many years, St. Jude Children's Research Hospital, whose mission is to help further research to end childhood cancer and other life-threatening diseases. With their summer and fall tours combined, FIVE FINGER DEATH PUNCH and BREAKING BENJAMIN have now donated over $250,000 to charities in 2018.

The tours capped a massive 2018 year which saw both co-headliners release brand-new hard rock albums that topped the charts this spring. FIVE FINGER DEATH PUNCH released its seventh studio album, "And Justice For None" (May 18), debuting at No. 4 on the Billboard Top 200 chart, and BREAKING BENJAMIN's sixth studio album, "Ember" (April 2018) debuted at No. 3.

In 2018 year-end radio reports, FIVE FINGER DEATH PUNCH was just named the No. 1 most-played artist on U.S. rock radio in 2018, BAD WOLVES came in at No. 3 and BREAKING BENJAMIN harnessed the No. 9 overall spot on the list. Each artist on the summer and fall tours topped the rock radio charts this year. FIVE FINGER DEATH PUNCH reached No. 1 with "Sham Pain", and now has "When The Seasons Change" climbing the charts, BREAKING BENJAMIN reached No. 1 with two new singles "Red Cold River" and "Torn In Two", and NOTHING MORE hit No. 1 with "Go To War". Additionally, BAD WOLVES went to No. 2 with "Hear Me Now" following their global No. 1 hit this year with "Zombie" while FROM ASHES TO NEW is coming off a No. 2 hit and IN FLAMES' single "The Truth" peaked at No. 15.