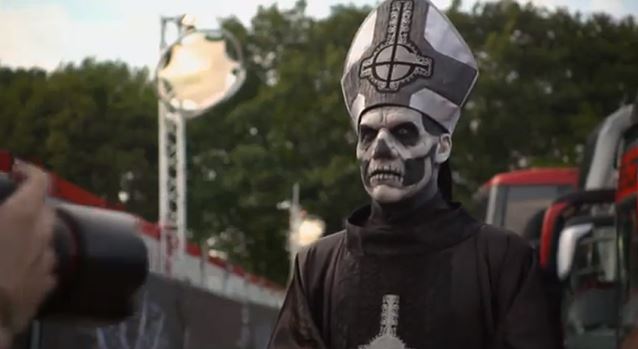 Part one of a documentary web series focusing on Swedish occult rockers GHOST can be seen below (courtesy of Vice's Noisey.com). Director Greg Olliver, who co-directed and produced 2010's "Lemmy" film and the soon-to-be-released psychological thriller/horror "Devoured", directed the video for GHOST.

Filming for the series and planned feature-length documentary began on the summer festival circuit and continues through the year.

"Greg has the perfect mix of story-telling acumen, musical taste and a fondness for the macabre... it made him the ideal choice to tell the story of GHOST," said Adam Farrell, creative director of the band's label, Loma Vista.

"You can't point a camera at GHOST without every frame of footage looking like heavy-metal gold," said Olliver.

"I was thrilled to hear that they wanted to work with me.

"Making films with legends like Lemmy and Johnny Winter, who have well-known stories, is one thing, but to work with a band that's on a fast rise to fame and has a mysterious story which is currently unraveling requires an entirely different approach. Add in the anonymity of the group and the look that they have... and you suddenly have a whole lot to chew on as a director. The only downside is that I felt a bit silly on stage filming while NOT wearing a robe and black mask."