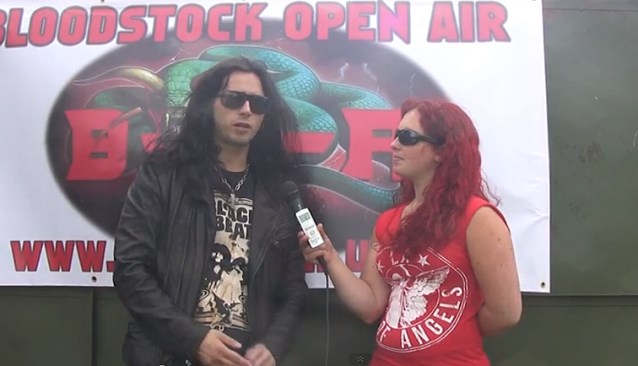 GetYourRockOut conducted an interview with FIREWIND and OZZY OSBOURNE guitarist Gus G. (real name: Kostas Karamitroudis) at the Bloodstock Open Air festival, which was held August 8-11 at Catton Park, Derbyshire, United Kingdom. You can now watch the chat below.

In a recent interview with Metal Assault, Gus G. stated about Apollo's departure: "People following the band for the past few years would know that we've had different session guys at the live shows even when Apollo was in the band because he just had to skip a few tours during the year. So whenever the schedule was getting too heavy for him and he would have to take care of stuff back home, we had to get other guys. So this time, he had to skip again and he was like, 'You know, instead of holding you guys back, I might as well just quit.' I think he did the right thing for him, for us as well, because we can only do that [getting session vocalists] so many times and we're better off trying to find a new permanent guy instead of getting replacements for a tour. So at least now we know that we have to find somebody new, and in a sense it's a bit sad, but at the same time it's some sort of relief."