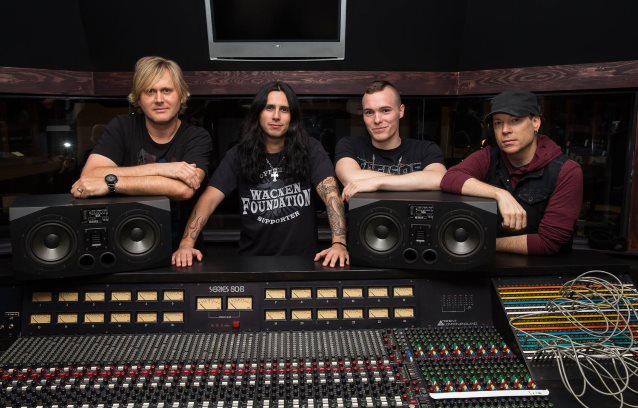 Greek guitar virtuoso Gus G., well known in rock and metal circles for his work as Ozzy Osbourne's guitarist and as leader of his own band FIREWIND, has finished recording his second solo album, "Brand New Revolution", for a summer release via Century Media in Europe, Australia and South America, Dismanic/eOne in North America and King Records in Japan.

"Most of the tracks were recorded live with me and the rhythm section jamming in a room.

"There's a certain energy about it that I hadn't previously done on a record before.

"The album is being mixed by the legendary Mike Fraser (METALLICA, AC/DC, AEROSMITH, VAN HALEN) in Vancouver, as I write these lines.

"The first few mixes I got sound crushing! I can't wait to share this with you all!

"In regards to the music itself, I can say that it's a continuation of the modern hard rock style I followed on my first album, although I think this one's a bit heavier. Needless to say, there's tons of guitar on it!"

Speaking about how different it is pursuing a solo career as opposed to running a band like FIREWIND, Gus told Metal Temple magazine: "Being in a band, it's a certain commitment that you need to keep everybody on the same page and everybody needs to be there and do things all together, and sometimes that doesn't go too well. Because, you know, this type of lifestyle is not for everybody; it can get tiring and all that. And I understand when members have to leave and do their own thing, and it's hard. Of course it's tons of fun being on that stage and playing, but that's, like, one hour or one and a half hour out of the whole day. The rest is… It can be tiring sometimes and [you are sometimes forced to travel] not under the best conditions."

He continued: "The whole idea of the solo thing is basically just… it allows me to collaborate with different friends, different musicians, co-write with different people, which is something I really love doing. And at the same time, it gives me the opportunity of playing… not having one set of fixed musicians for a tour. I have an American band for my American shows and a European band here. And I work with different singers, and it's also very cool. And, yeah, if somebody cannot do a tour, that's cool; we'll bring another friend in. And it's easy for everybody. There's no drama. There's no bad blood with anybody. It's all friends playing music."

Regarding why he decided to record a solo album at this point in his career, Gus said: "It's a refreshing thing for me. Being in a band and doing that for ten years and releasing seven albums and lineup changes and all this stuff… We felt we needed a break after our singer left, and just taking time out from FIREWIND and doing this was just something refreshing for me. That was really what I was looking for. It gave me the excitement again that I had when I was in my early 20s."