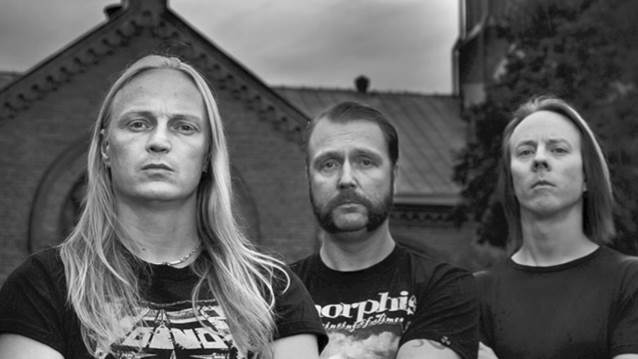 Finnish progressive death metal band CONVULSE has released a brand new song called "The Summoning". It's the first taste of the band's upcoming album, which will be recorded in 2019. Some may hear echoes of bands like KINGSTON WALL or old AMORPHIS, but mostly it's an example of unpredictable and lustful music that only CONVULSE can deliver its own twisted way.

As one of the oldest Finnish death metal bands, CONVULSE has a somewhat interesting history, to say the least. Beginning as a full-on death metal band in 1990, the debut demo, "Resuscitation Of Evilness", as well as the 1991 debut album, "World Without God", were more or less successful attempts from CONVULSE to flex their death metal muscles for the whole world.

In 1993, CONVULSE returned to the limelight again, offering two new songs on the "Lost Equilibrium" CD single — and, at the same time, giving a taste of what was to be expected on their second album, 1994's "Reflections". CONVULSE had started incorporating some rock 'n' roll elements into their murky and uncompromising death metal sound, much like some of their Finnish extreme metal comrades (XYSMA and DISGRACE primarily come to mind). The band's "death 'n' roll" sound on their sophomore album divided the CONVULSE fanbase, with some embracing the new direction while facing rejection from others. It's both difficult and pointless to speculate at this point whether the drastic musical change led to CONVULSE's downfall, but perhaps it was one of the reasons behind the split up in 1994. Only the original band members can say for sure...

Fast forward nearly two decades, and new life had been breathed into the old CONVULSE corpse. In early November 2013, CONVULSE's third album, "Evil Prevails", was unleashed by Svart Records, and was followed by "Cycle Of Revenge" in 2016.