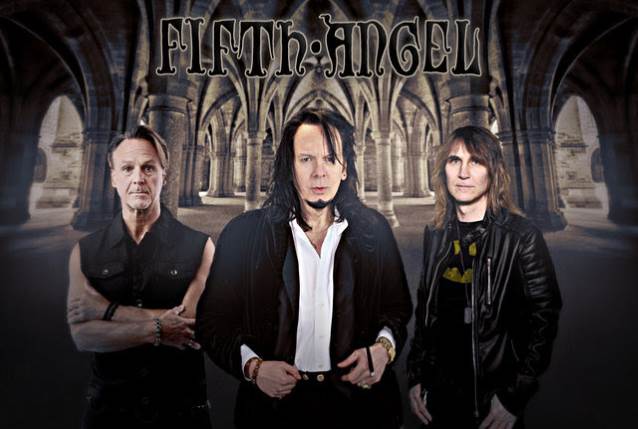 FIFTH ANGEL has inked a deal with Nuclear Blast Records. The band's third album, "The Third Secret", will be released in September.

FIFTH ANGEL recently put the finishing touches on their first new album in almost 30 years, "The Third Secret", which will be released in September of 2018. The album features the incredible talents of guitarist and lead vocalist Kendall Bechtel, bassist John Macko and drummer and backing vocalist Ken Mary. Says bassist John Macko: "When we began this process, we always were mindful to write songs that moved us as a band first. We felt that if we achieved that, then the music will most likely touch our fans as well." Adds lead vocalist and guitarist Kendall Bechtel: "We are very proud of the new album! We hope the fans will hear the classic threads of the FIFTH ANGEL they know and love, along with the growth and maturity the individuals of the band have gone through over the years. We hope they love the new songs as much as we do!"

Says drummer Ken Mary, "Over the years, we have worked with some amazing record companies, such as Roadrunner Records, Shrapnel Records, and one of the biggest labels in the world, Epic Records. However, we are even more excited to be working with the Nuclear Blast family for one simple reason: the incredible people that run this company really love the music itself and are themselves fans of great metal music. This indeed is a unique and astounding situation, and we could not be more excited to make this announcement of making Nuclear Blast our home! We also want to thank all of the metal warriors that have kept the spirit of FIFTH ANGEL alive and well for over three decades, and we are so very excited to finally... finally... finally announce the release of our long-awaited new album, 'The Third Secret'."

Adds vocalist and guitarist Kendall Bechtel: "We also want to say a special thank you to Nuclear Blast for giving us the musical freedom to create the art that we feel best represents FIFTH ANGEL! We had an incredible and very long journey creating this record and we hope the fans love it as much as we loved making it for them. In the end, it is the fans of the music that keep it alive, and without you this record would not be possible!"

States Nuclear Blast A&R manager Jaap Wagemaker: "Nuclear Blast is very proud to reveal the secret about the signing of legendary U.S. metal band FIFTH ANGEL! Last year when I was at the Keep It True festival I was blown away by the live performance of FIFTH ANGEL! I have always been a big fan of the two albums they released, and seeing them play these songs live with such an ease was a real joy for the ears! Before and after the show, I had the pleasure of meeting John Macko and Kendall Bechtel and they played me some new music. Although it was still in the demo stages and sounding rough, you could hear that it had that iconic FIFTH ANGEL signature! We remained in contact and a couple of months later I received the first of three completed demo songs. These songs captured the sound and the spirit of the old classics perfectly! I listened to those songs in rotation for days! It is with great pride that we welcome FIFTH ANGEL to the Nuclear Blast family!"