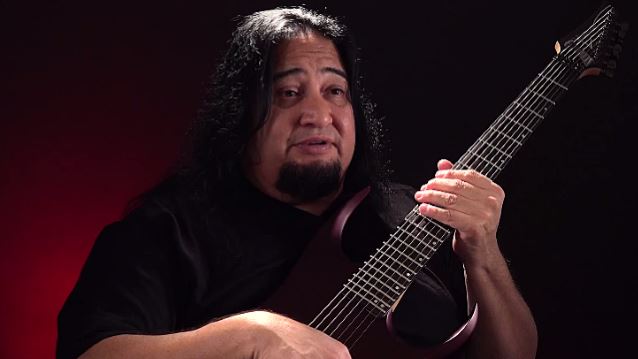 Anthony Morgan of Metal Forces recently conducted an interview with FEAR FACTORY guitarist Dino Cazares. A couple of excerpts from the chat follow below.

"Obviously a song like 'Expiration Date' is an electronic ballad; the song is epic, it's beautiful. It's different to what we've done in the past when it came to ballads; songs like 'Resurrection' and 'Timelessness' are completely different, and 'A Therapy For Pain', which is on 'Demanufacture'. Songs like 'Church Of Execution', and 'Regenerate'. There's a quite a few parts in the songs that aren't connected to stuff from the past, like the guitar solo in 'Soul Hacker'. There's different elements that we don't do very much, or that we don't do very often. The only time a FEAR FACTORY record had a solo on it was a song called 'Fear Campaign' off of 'Mechanize' (2010). We only had songs on the album that were melodic and epic with a big, huge chorus. That was something that we did slightly different on this record."

"It's a singularity concept that has already happened. In other words, man and machine have already become one. We feel that on this record, the genexus is a hybrid of words; 'genesis' meaning the beginning of time, and 'nexus' which is actually the connection between man and machine — the singularity process. We're calling this the genexus generation, a new model of a hybrid of a man / machine basically. This record goes through different processes of what we need to do to survive in today's world, and also, it uses this man / machine for militaristic purposes. For combat, for all kinds of things. Basically, we're trying to survive, and at the end of the record on a song called 'Expiration Date', you realize that we have an expiration date and we will die, just like everything else. Humans have an expiration date — we all do."

On signing with Nuclear Blast Entertainment:

"Monte Conner was the guy who signed the band originally to Roadrunner Records, and if there's anybody who really understands the band, it's him. We released a lot of records together. When Roadrunner got bought out, he left there and started his own label — his own imprint called Nuclear Blast Entertainment — and he's signed a lot of bands. He's only been there for maybe the last two years, but he's signed a lot of bands; he's got SUICIDE SILENCE, MACHINE HEAD, SOULFLY, THY ART IS MURDER — he's got quite a few bands.

"He approached us about signing to the label over a year ago, and obviously he knows the band extremely well. It's great working with him again, because it feels like we have the old team back together. There's me and Burt [C. Bell, vocals] obviously, and then we've got Rhys Fulber. We've got Tony Campos who we've known for years, and Monte Conner. The label is just… It's especially good working with the label, because they're actually fans of the band and fans of the music. It definitely helps when people at the label love the band."

On Nuclear Blast Entertainment being a flashback to '90s-era Roadrunner Records:

On touring Europe in late 2015 to commemorate the 20th anniversary of "Demanufacture":

"Can you believe that that record's already 20 years old? It just went by fast. We feel that because that record has fan favorites, it would be good to do a tour around that just for a whole new generation of people who never got to see us during that time and that tour. To just play it in its entirety, man. To show respect to what was a record that opened a door to metal. It basically gave a facelift to metal. Burt's vocal style is definitely something that is very, very common these days among other bands. We just wanna show people where it came from, where it started, so hopefully a new generation will get into FEAR FACTORY."

Read the entire interview at www.metalforcesmagazine.com.