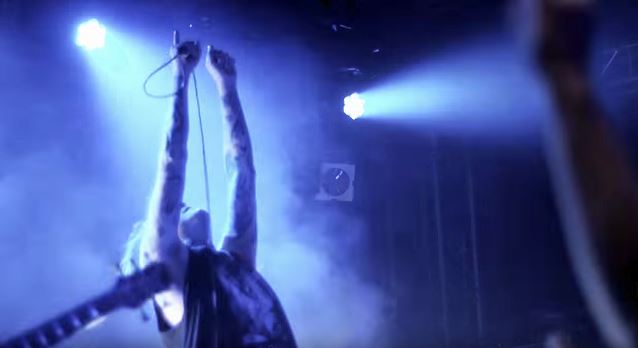 In this episode, FEAR FACTORY members Dino Cazares and Burton C. Bell discuss life on the road for extreme metal bands. Filmed on the day of their European bus crash accident, Dino and Burton reflect on the necessity for them to keep going despite the dangers of the road.

Said Bell: "Touring has always been a necessity, especially for extreme metal bands, because the record sales were never enough to live off — not like a pop band or something like that, or a top radio type of band.

"We were fortunate to begin our career before there was an Internet, because we started a full-on grassroots following that has stayed with us ever since the beginning. If it were not for that, touring would be a lot different for us these days."

Added Dino: "Metal fans are generally very loyal; they don't like your band, they love your band, and they wanna support you as much as they can. It's just economics; it's like where our economy is, you know what I mean? Your business fluctuates. The economy's well, people have got money to go out and buy tickets and t-shirts, more people come to your shows. The economy's hurting, it hurts us too."

FEAR FACTORY will embark on a U.S. headlining tour next month. Support on the trek, which will see the band perform its classic second album "Demanufacture" in its entirety, will come from Swedish metallers SOILWORK.

FEAR FACTORY completed a European trek last fall which saw the band playing "Demanufacture" in its entirety. They also showcased songs from their new album, "Genexus", which came out on August 7, 2015 via Nuclear Blast.