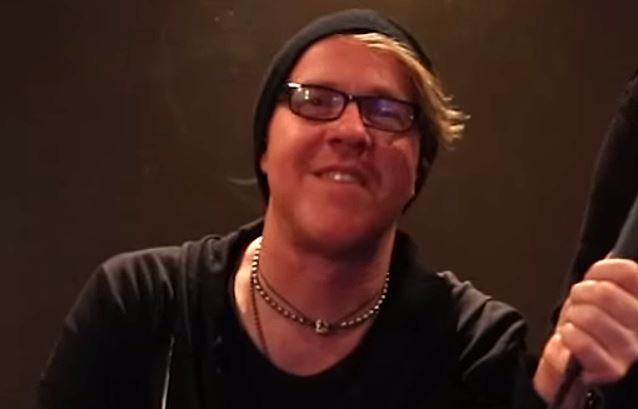 On November 7, Kaaos TV conducted a video interview with FEAR FACTORY singer Burton C. Bell and guitarist Dino Cazares at The Circus in Helsinki, Finland. You can now watch the chat below.

Asked about his recent statement that streaming music services like Spotify and Pandora are "getting away with murder" by not paying songwriters a fair royalty rate because of the consent decrees that govern how the vast majority of American songwriters are compensated for their work, Bell said: "They pay 0.0001 cent of royalties, and they can get away with it, because we don't have any say in what our royalty rate can be. And so, because of the copyright law that was written seventy years ago, they can do that. And I'm doing my part with ASCAP to try and promote and try and change that. There's a representative of Pennsylvania, Tom Marino, [who] is actually on the board to change that copyright law, and I've spoken with him, with a bunch of other ASCAP people. We were just, like, 'This has to change. We need a living wage as well. They can't just get away with this anymore.' And it's just not me. It's all other artists too. Spotify just announced they made billions in profits last year — billions!"

Bell added: "Apple actually turned around… Apple started a new streaming service, and they're actually paying artists properly. So is Google. They're paying a proper royalty rate. So it's Pandora and Spotify and iHeart Radio that haven't gone on board yet. But they are the biggest ones."

Burton also talked about how diminishing record sales have affected FEAR FACTORY's ability to survive as a band. He said: "It's harder to… How we work is we've gotta create and album, and the label supports us by loaning us money to make this album. And the slower the record sales, the longer it takes to pay back that money. And so, if you have a huge budget, it's gonna take forever to pay it back."

Under a "consent decree" issued by the Justice Department in 1941, the moment someone requests a license from ASCAP and the other main publishing royalty organization, BMI, which together control about 90% of all commercially available recorded music, ASCAP or BMI must say yes — before they can negotiate price. When a fee can't be agreed, a rate-setting court decides the percentage amount of royalties these license holders pay in exchange.

ASCAP and BMI, as well as individual songwriters and publishing companies, have long lobbied for changes to the consent decrees, arguing that the current system fails to take into account innovations that have significantly changed the field, such as digital music played on streaming services such as Spotify and Pandora, and claiming that the system under-compensates their members for these rights.