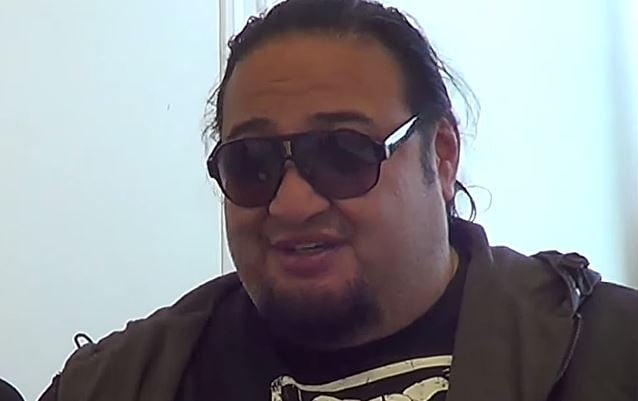 Cristina Mlynek of Metal4 conducted an interview with FEAR FACTORY guitarist Dino Cazares at the Rockharz Open Air festival, which was held last weekend in Germany. You can now watch the chat below.

Speaking about FEAR FACTORY's musical evolution on the band's upcoming album, "Genexus', Dino said: "I think FEAR FACTORY has a very unique style. I mean, we've definitely evolved over the years. You know, from our first record to our second record… the second record was a massive jump. And then going into the third record was another different period. And then going into the fourth record, a lot of things changed. And every record, we try to evolve a little bit different here and there. And I think on this record, we wanted to really concentrate on a lot of the groove element. And there's also quite a few songs that are pretty fast. We noticed that when we play a lot of the groovier songs live that it goes over better — especially big festivals. Big, heavy, groovy songs like 'Edgecrusher' and 'Linchpin' and, obviously, a new song called 'Soul Hacker'."

Dino also talked about the recent departure of FEAR FACTORY bassist Matt DeVries (previously of CHIMAIRA, where he played guitar, and SIX FEET UNDER) and addition of Tony Campos (ex-SOULFLY, STATIC-X, PRONG, MINISTRY). He said: "Well, we had asked [Tony to join] awhile ago, and, of course, he was busy playing in a band called SOULFLY. So we had Matt DeVries come in, but unfortunately Matt DeVries… Well, not unfortunately… Unfortunately for us, but for him, he wanted to spend more time with his family, so he left the group. And Tony found out, 'cause Tony was playing in MINISTRY at the time, so we were touring together. And then Tony decided to ask. 'Cause we hadn't made any kind of announcement yet; we didn't know anybody was gonna find out. And then Tony just asked me. He goes, 'Hey, man, Matt's leaving…' I'm, like, 'Duh! C'mon in.' It was perfect."

"Genexus" will be released on August 7 via Nuclear Blast Entertainment. The follow-up to 2012's "The Industrialist" was co-produced by longtime collaborator Rhys Fulber, along with guitarist Dino Cazares and vocalist Burton C. Bell and mixed by Andy Sneap (ARCH ENEMY, TESTAMENT, EXODUS, MACHINE HEAD). Artwork was once again handled by Anthony Clarkson. Drums on "Genexus" were performed by Mike Heller (MALIGNANCY).