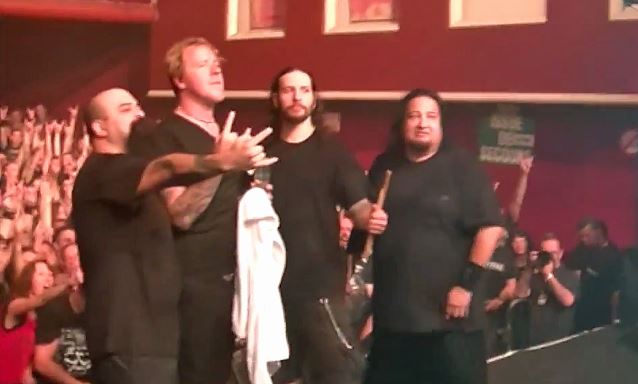 The official video recap of FEAR FACTORY's July 7 performance in Lille, France can be seen below.

FEAR FACTORY's new album "Genexus", will be released on August 7 via Nuclear Blast Entertainment. The follow-up to 2012's "The Industrialist" was co-produced by longtime collaborator Rhys Fulber, along with guitarist Dino Cazares and vocalist Burton C. Bell and mixed by Andy Sneap (ARCH ENEMY, TESTAMENT, EXODUS, MACHINE HEAD). Artwork was once again handled by Anthony Clarkson. Drums on "Genexus" were performed by Mike Heller (MALIGNANCY).

Cazares previously stated about he making of "Genexus": "We really feel this is a very special FEAR FACTORY album. While being careful not to replicate ourselves, this album still has a very classic FEAR FACTORY vibe that we feel will appease both old and new fans. The aggressive, melodic and industrial elements are all intact and shine more than ever."