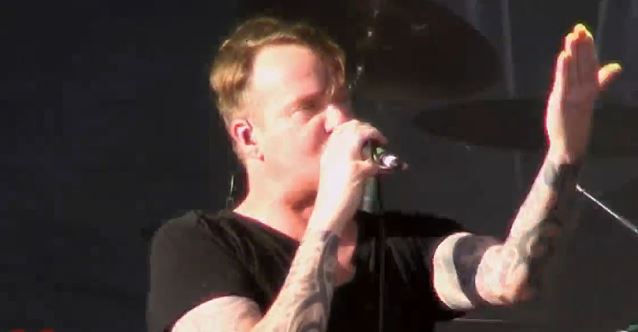 Fan-filmed video footage of FEAR FACTORY's entire March 1 performance in Brisbane, Australia as part of this year's Soundwave festival can be seen below.

FEAR FACTORY last year entered NRG Recording Studios in North Hollywood, California with longtime producer/collaborator Rhys Fulber and engineer Mike Plotnikoff to begin tracking its new album for a summer 2015 release via Nuclear Blast Entertainment. The CD will be mixed by acclaimed British producer Andy Sneap, who has previously worked with MEGADETH, KILLSWITCH ENGAGE, EXODUS, TESTAMENT and ACCEPT, among many others.

Speaking to Silver Tiger Media, FEAR FACTORY singer Burton C. Bell stated about the band's new album: "It's classic FEAR FACTORY sound, the sound that fans have always expected, but I think because we are taking our time, the songs are really well crafted. Without losing the edge or the angst. Without losing the essence of FEAR FACTORY, but they are well-crafted songs. We are working on the album cover right now. We have really connected with artist Dave McKean, who did the album cover for 'Demanufacture' and 'Obsolete'. He is working on something. We have an album title that we are happy with which really represents a good FEAR FACTORY title."