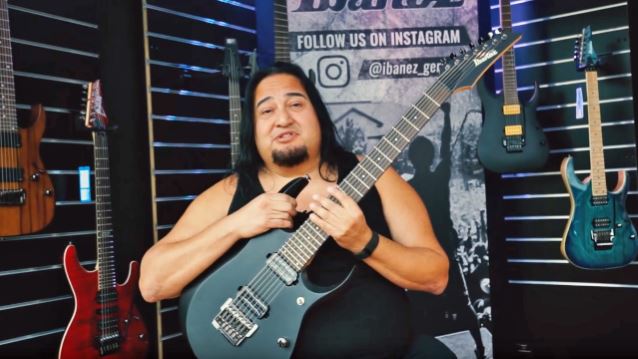 Thomann conducted an interview with FEAR FACTORY guitarist Dino Cazares on August 18 at the Summer Breeze festival in Dinkelsbuhl, Germany. You can now watch the chat below.

Speaking about iconic guitarists that have inspired him, Dino said: "There's a lot of iconic musicians that I look up to. I mean, to name a few… When I first started out, it was Angus Young from AC/DC. He was the reason why I wanted to play guitar in the first place. The minute I'd seen him play live on stage on television, I was, like, 'Wow! I wanna be like that guy.' So, to me, those are iconic musicians that, if I ever saw him, I wouldn't even know the first thing to ask him, I would be so nervous. Of course, Eddie Van Halen. I had the pleasure of meeting him, and he was a cool guy. [He's another] iconic guy. That's one of the guys I modeled my tone after, because way back he was using the JCM 800s on the first [VAN HALEN] record, and when I got my head modified for the first time back in 1984, I told the guy who was modifying my head: 'I want my head to sound exactly like that first VAN HALEN record.' So, to me, those guys are the guys that helped shape who I am as a musician. So, to me, those are the two iconic guys that… I don't know… I would just freak out."