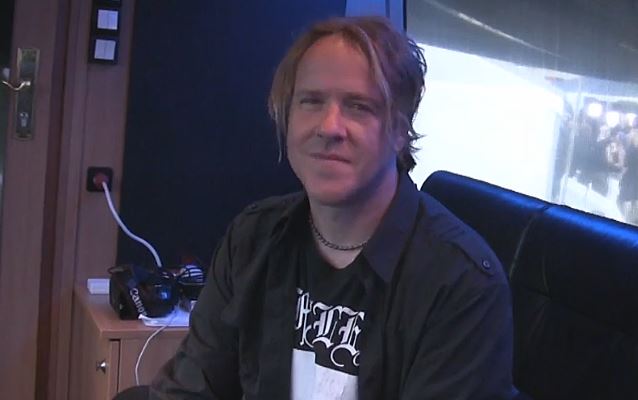 Felicity Hall of GetYourRockOut conducted an interview with FEAR FACTORY vocalist Burton C. Bell at this year's edition of the Bloodstock Open Air festival, which was held August 11-14 at Catton Hall, Walton-On-Trent, West Midlands, United Kingdom. You can now watch the chat below.

Asked if the current political climate around the world has made him reconsider his previous vow to keep politics out of FEAR FACTORY's music, Bell said: "I'm gonna keep them separate, because you never know what people believe in or what they follow. But I believe that the social nature is what all people can understand and the social behavior of how we interact as human beings and how we interact with authority [is something] everyone can understand. So I'm gonna keep it that way. You know, politics, that's a whole another beast that… Politics is just a joke."

Bell, however, made it clear that he will continue to write about topics that are close to his heart, even if his message sometimes falls of deaf ears.

"I have the opportunity in this life given to me, and I'm gonna not waste my voice," he explained. "I wanna use it to speak passionately about what I believe in. And if I can have at least one person hear me, that's worth it."

FEAR FACTORY's latest album, "Genexus", was released on August 7, 2015 via Nuclear Blast Entertainment. The follow-up to 2012's "The Industrialist" was co-produced by longtime collaborator Rhys Fulber, along with guitarist Dino Cazares and Burton C. Bell and mixed by Andy Sneap (ARCH ENEMY, TESTAMENT, EXODUS, MACHINE HEAD). Artwork was once again handled by Anthony Clarkson. Drums on "Genexus" were performed by Mike Heller (MALIGNANCY).