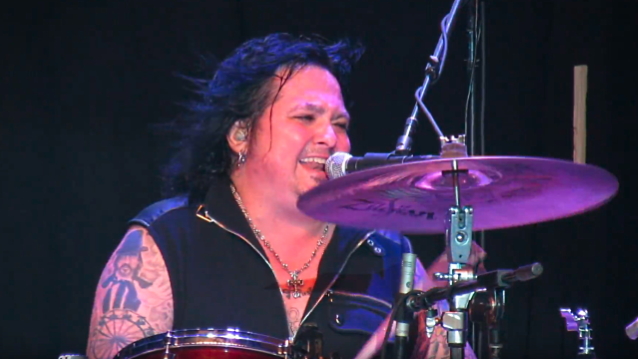 FASTER PUSSYCAT drummer Chad Stewart says that he is recovering after testing positive for COVID-19, the disease caused by the new coronavirus, earlier in the month.

Stewart took to his Twitter on Saturday (March 28) to write: "Thank you everyone for your concern on my recent diagnosis with Covid 19. I'm much better and resting. The worst is over. Hope to see you all as soon as we can get back on the road. Stay safe!! Wash your hands!! Cheers."

Stewart, who has been playing drums for FASTER PUSSYCAT for nearly two decades, spoke to Just A Rock N Roll Junkie about how he first joined the group. He said: "I was in a band with a guy named Coyote Shivers, from Empire Records. He was the rock star guy and he was married to Bebe Buell who's Liv Tyler's mom. I was in Coyote's band when he moved to L.A. I had just gotten into L.A. from New York, as did he, and we started playing together. And Taime [Downe, FASTER PUSSYCAT singer] had just started the Pretty Ugly club and I was also playing with a guy named David Casper, so I was playing in a couple of bands that were playing Pretty Ugly, Taime's club. The drummer for THE NEWLYDEADS wasn't cutting it and they were going to let him go, and Taime came up to me and said, 'You're my guy.' And I said, 'Yup, I'm your guy,' because I loved industrial music and it was fun. But literally, I wasn't even half a year into it — we had Tim Sköld from MARILYN MANSON playing lead guitar — and Taime said, 'We have the opportunity to put FASTER PUSSYCAT back together with Greg [Steele, guitar] and Brent [Muscat, guitar]. Getting Eric [Stacy, bass] and Brett Bradshaw [drums] is just not going to happen. I don't want to deal with the nonsense with them, so I want you and Danny [Nordahl].' So, that's how it went. So, PUSSYCAT started again and I've been here since 2001."

FASTER PUSSYCAT hasn't released a new studio album since 2006's "The Power & The Glory Hole". A live album called "Front Row For The Donkey Show" came out in 2009.

Thank you everyone for your concern on my recent diagnosis with Covid 19. I’m much better and resting. The worst is over. Hope to see you all as soon as we can get back on the road. Stay safe!! Wash your hands!! Cheers.