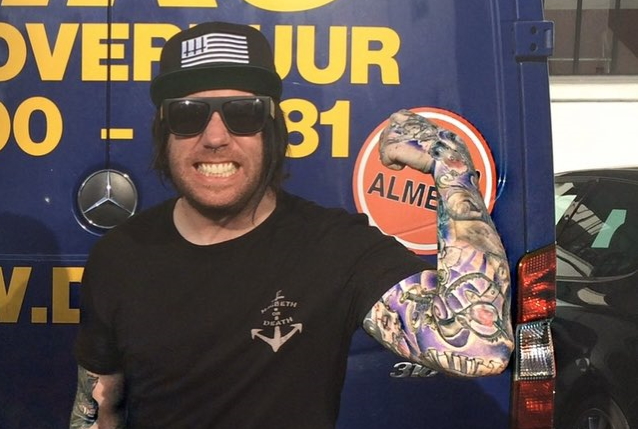 FALLING IN REVERSE guitarist Derek Jones has died at the age of 35.

His passing was confirmed by singer Ronnie Radke, who tweeted out four photos of Jones earlier today and included the following message: "I'll never forget when you picked me up from jail in your old tour van to start FALLING IN REVERSE. Your spirit will be interwoven through the music I write forever. Rest in peace Derek Jones. My heart is broken."

Jones joined FALLING IN REVERSE in 2010 and appears on all four of the band's albums.

Prior to hooking up with FALLING IN REVERSE, Jones was a member of the hardcore act A SMILE FROM THE TRENCHES.

Last November, Jones's fiancée, Christina Cetta, passed away after a battle with cancer.

After Cetta's cancer returned in March 2019, Jones launched a GoFundMe campaign to raise $100,000 needed for her treatment. FALLING IN REVERSE gave special shirts to fans who donated. At the time, Derek stated about Christina: "She is my life and the best thing to ever happen to me. We've been together 10 years and I'm looking forward to 100 more together."

FALLING IN REVERSE's most recent album, "Coming Home", came out in 2017. In 2019, the band collaborated with SLIPKNOT and STONE SOUR frontman Corey Taylor on the standalone single "Drugs", and earlier this year, FALLING IN REVERSE released a "reimagined" version of the title track of its debut LP, 2011's "The Drug In Me Is You".

I’ll never forget when you picked me up from jail In Your old tour van to start falling in reverse. Your spirit will be interwoven through the music I write forever. Rest In Peace Derek Jones. My heart is broken. pic.twitter.com/6ugnm1MmTm