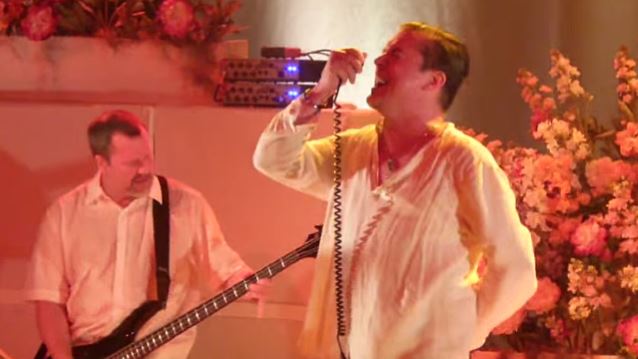 FAITH NO MORE has teamed up with Live Nation and Yahoo! to live-stream the band's May 8 concert from The Fillmore in Detroit, Michigan. This is one of 365 concerts to stream over a 12-month period on the Live Nation channel on Yahoo! Screen.

Fans will also have the freedom to stream the concert wherever they are through Yahoo Screen on iOS, Android, mobile Web, desktop, and Smart TV platforms, including Apple TV, Roku and Xbox 360.

The bonus disc for "The Real Thing" contains remixes of three of FAITH NO MORE's biggest hits — "Epic", "Falling To Pieces" and "From Out Of Nowhere" — non-album cuts like "The Grade", "Cowboy Song" and "Sweet Emotion", plus live cuts like a cover of BLACK SABBATH's "War Pigs".

A vinyl release for both albums is planned for August.

"Sol Invictus" will be streaming in its entirety via NPR on Monday, May 11, with Pandora giving listeners an early listen as of May 13. Exclaim will be streaming the album for Canada. The band performs on "The Tonight Show" on May 13, with the late night TV appearance being FAITH NO MORE's first since 1995

FAITH NO MORE is currently on its first full North American tour since 2010.