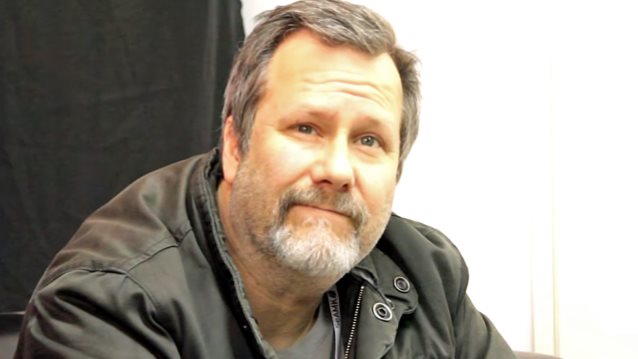 He continued: "I kind of felt like we got into this era when GUNS N' ROSES came in and everything went retro, and I feel like we're still coming out of this retro thing. I mean, it has nothing to do with music sales, or the music business, whatever Gene Simmons is talking about. It more has to do with… culture working in a forward direction. I kind of feel like we went backwards for about twenty years. I'd like to see us go forward again."

Asked if he thinks there will be new stadium-sized rock bands after groups like METALLICA and IRON MAIDEN have retired, Gould responded: "It's hard to say. It's such a complicated thing, because there's so many aspects to that… To get to that big size, you need so much organization and logistics and corporate sponsorship and stuff. It's really an economic question whether that's gonna happen. I don't think it's a cultural question. I think there's always people that are gonna have good ideas that will make people wanna get together and do things, 'cause, as humans, I think that's just how we're built."

"Sol Invictus", FAITH NO MORE's long-awaited follow-up to 1997's "Album Of The Year", sold around 31,000 copies in the United States in its first week of release to land at position No. 14 on The Billboard 200 chart (which includes stream activity). The CD, which was released on May 19 via the band's newly formed imprint Reclamation Recordings, which is distributed by Ipecac Recordings, also landed at No. 2 in Australia, No. 4 in Germany and No. 6 in the U.K.