We thought it would be nice to break the silence regarding the next chapter in F.K.Ü.'s gruesome horror metal tale. Larry, Pete, Pat and Ted gathered this evening to review the progress and we came to the conclusion that we have 10 songs more or less ready and a few more are in the making. A couple of months of writing remains before we will record these moshing anthems in February. As of now, April is being mentioned for the release, but that's still very tentative. So there you go, you finally have something to live for, douche bags!

"We've teamed up with one of the most legendary thrash bands [HIRAX] to release the most awesome piece of vinyl [split seven-inch single] this year. Basic math tells you that F.K.Ü. + HIRAX = maximum mosh overload! We contribute with a brand new track titled 'Twitch of the Thrash Nerve' and HIRAX blasts off 'Satan's Fall'. Not only that, but the record contains brutally awesome artwork from Jeff Zornow and Mark Riddick. I'm pretty sure that by now you all understand what an awesome record this is!

"And don't forget the 7" that we released a couple of months ago through Torture Garden Pictures. It contains the tracks 'Horror Metal Moshing Machine' from the upcoming new album and our cover of TANKARD's 'Space Beer' from the TANKARD tribute CD. With totally awesome artwork by Bill Hauser this 7" it is a must-have!"

Photo by Soile Siirtola of www.extremmetal.se 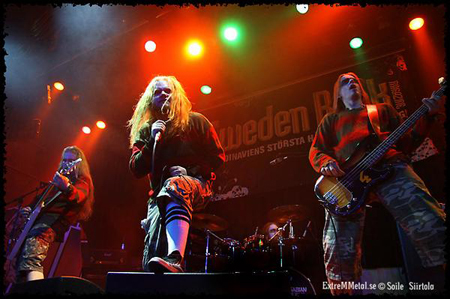