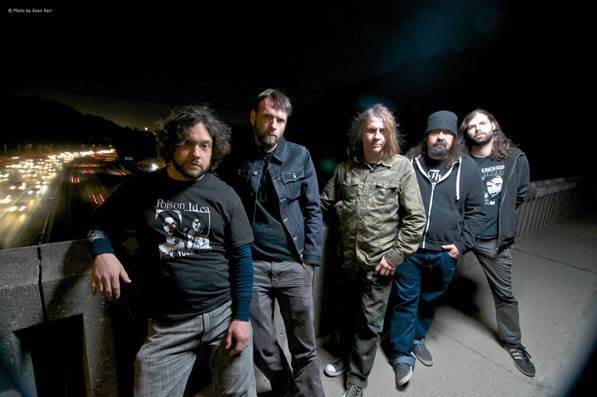 Harold "Howie" Herula of the "Hard Edge Radio" show on TapDetroit.com recently conducted an interview with bassist Gary Mader of New Orleans' disciples of hardcore, blues-based, post-amplified audio wreckage, EYEHATEGOD. You can now listen to the chat using the audio player below.

EYEHATEGOD's new, self-titled offering studio recording was released last month via Housecore Records. The domestic version of the set comes in a CD digipack while the LP is a single slab of vinyl in a gatefold jacket. The first pressing is limited to 1600 copies and made available in the following colors:

An unexpected tragedy occurred shortly upon returning home from a recent five-week European tour in the fall of 2013: Joey LaCaze passed away due to respiratory failure. An outpouring of condolences and tributes spread online. Enough can't be said of the loss felt by the band, family and friends. Fortunately, LaCaze's drum tracks were captured by Anderson and appear on the album, creating the definitive tribute for the member of the band who encapsulated best just what EYEHATEGOD was all about; seriously not taking yourself too seriously. New Orleans native, Aaron Hill (MOUNTAIN OF WIZARD, MISSING MONUMENTS), took over for LaCaze without missing a beat, both figuratively and literally.