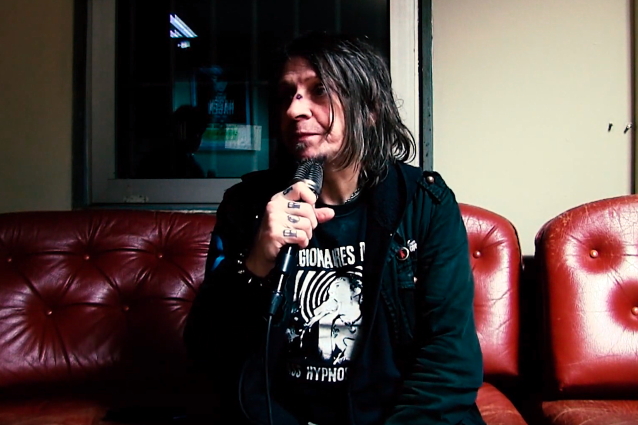 In a conversation with J. Vuorela Interviews prior to EYEHATEGOD's February 14 concert at Kulturhaus Astra in Berlin, Germany, frontman Mike "IX" Williams was asked whether the New Orleans sludge metal pioneers had any idea they were helping create a new style of metal during their early years. The band's 1990 "In The Name Of Suffering" and 1993 "Take As Needed For Pain" studio albums are considered their seminal works and are often cited as pillars of the American sludge sound alongside ACID BATH, BUZZOV*EN and CROWBAR.

"No, not at all," Mike said(see video below). "No. And I know I've been on record before saying that I don't even like the term 'sludge.' I see no point in it, really, but I get it. It's a way to explain a genre of music. We're just a rock and roll band if I steal that from Lemmy [Kilmister, MOTÖRHEAD]. He just said MOTÖRHEAD is a rock and roll band and I believe that about us. I wouldn't put us in any category. But back in the day when we were doing this band, we just wanted to do a band that sounded like bands we liked. There's influence from all sorts of things. We all as individuals, me and Jimmy [Bower, guitar], who are the original guys in the band, we listen to different music totally together. There's so many different influences that go into this to make it sound like EYEHATEGOD. We didn't ever sit down and say 'Let's do this and make this type of music.' We just took our influences and kind of ran with it."

Williams then spoke about the "secret" to EYEHATEGOD's 32 years as a band, one that has been filled with substance abuse issues and long delays between studio albums.

"We're too stupid to quit," he said. "That's one thing. I don't know…we're like bacteria. We keep growing and we won't go away. I'm sure some people want us to go away. I don't know…we just love doing what we do. That's the main thing. We just still have fun and we still love it. We always said when it stops being fun that there's no point, but it's still great. We love to tour. We've been touring non-stop for the past three years. We've been everywhere from South America to Vietnam to Russia, Australia, New Zealand and everywhere in between and we want to continue doing that. It's just a non-stop thing."