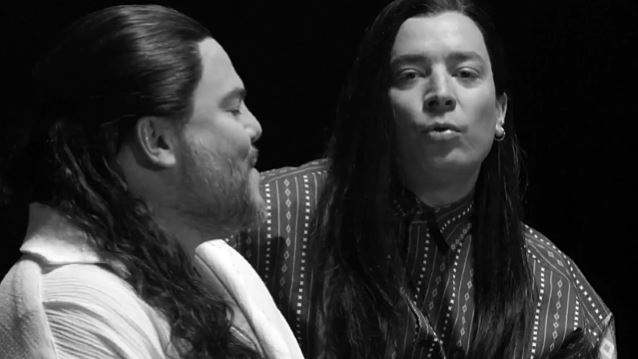 Jimmy Fallon was joined by TENACIOUS D frontman Jack Black on Monday's (May 4) "The Tonight Show" for an impressively accurate shot-for-shot recreation of EXTREME's "More Than Words" music video.

According to The Wall Street Journal, Black donned a wig that matched Gary Cherone's long, wavy locks — done up in a half-ponytail, just like in the original — and unbuttoned white pirate shirt, while Fallon brought Nuno Bettencourt's early-nineties look back to life with his smooth, stick-straight hair and buttoned-up-to-the-collar patterned shirt.

The original black-and-white video for "More Than Words" became an MTV staple and received one of pop's highest honors — being parodied by "Weird Al" Yankovic. In June 1991, it hit No. 1 on the Billboard Hot 100.

"We were trying to push ['More Than Words'] to the record company," Bettencourt told RollingStone.com. "We were on tour trying to call them and tell them, 'Listen, whenever we go to sing this song, we get drowned out by the audience. We're not telling you it's something special; they're telling us.' This was pre-'Unplugged'. And they were like, 'Where are we going to put this? Rock stations aren't going to play it, and it's too adult-contemporary. You guys aren't that.' And we just said, 'You've got to do it.' And we pushed and we went to the president of the label, and basically — I think I was in his office one day and I threatened to quit the band if he didn't at least give it a shot as a single. Later we got a call saying, 'All right, we're going in. We'll test it in a market.' They tested it in Denver, I believe. We're like, 'Great, it's never going to happen. They're just doing this to appease us so I don't quit the band.' Because I had a bit of a fit. So then our manager calls and goes, 'What the fuck you doing reaching out to the president of the label? You crazy?' And we got into a fight with him, so they at least did what they said what they were going to do. They tested it. And we're like, 'All right, we're going back to the studio.' It ends up being like No. 8 [on the station's call-in show] the first day. On a rock station, getting phones. So then the next day it's climbing; by the end of the week, it was No. 1 by Saturday. So they call us — the manager calls us — 'Don't get your hopes up. They still want to test it in one more place.' They still wouldn't believe it. So we were excited because I remember we went to MTV and we performed. They wanted us to perform on MTV with an audience, just about 30 or 40 people. And because of 'More Than Words', we said, 'We're a rock band. We don't want to just sit there and play the ballad,' because we asked them, 'Can we play some of the rock stuff acoustically?' Coincidentally. Not to say that we invented 'Unplugged', the show, but something happened format-wise because months later, almost a year later, the show popped up. Ironically enough, we were never asked back to play the actual show. Which was bizarre for us, because we actually had some unplugged stuff, purposely."

Regarding the original video, Cherone said: "We shot the video in the middle of a tour, I think. What we did musically, [directors Jonathan Dayton and Valerie Faris] got visually — black and white, no bells and whistles. The other guys were basically just hanging — we shut off the amps. So they got it. That was all them, to their credit. Turn off the noise. And the lighter was cute, and the dog. But I thought the visual did not take away from the music, and I think that's one of the reasons the video does not get old."