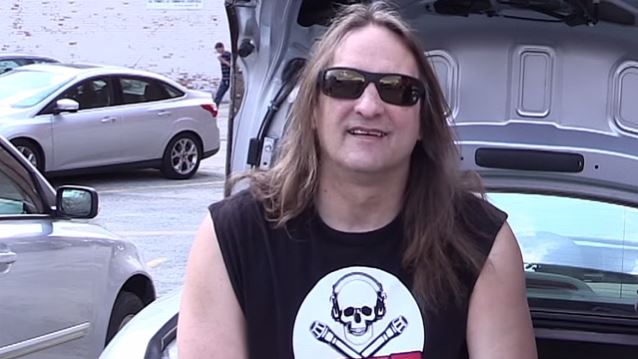 Washed Up Media conducted an interview with drummer Tom Hunting of San Francisco Bay Area thrash metal veterans EXODUS at this year's New England Metal & Hardcore Festival, which was held April 17-19 at The Palladium in Worcester, Massachusetts. You can now watch the chat below.

Speaking about how things are going with EXODUS at the moment, Tom said: "This band's had the roller coaster of members and lineup changes. I myself have been out of the band three times, so… We're in a good place right now. I mean, Zetro [Steve Souza, vocals] coming back, everything is fresh and he's kind of still in the honeymoon stage again. And he's singing better than he ever has. I mean, I don't know what he did to take care of his voice for the time he took away from the band, but… He did various projects: HATRIOT, and his other band AC/DZ, 'cause he's got that perfect Bon Scott [delivery]. They do AC/DC Bon Scott-era stuff. He was hungry for this. He wanted it really bad, and we needed somebody that wanted it really bad."