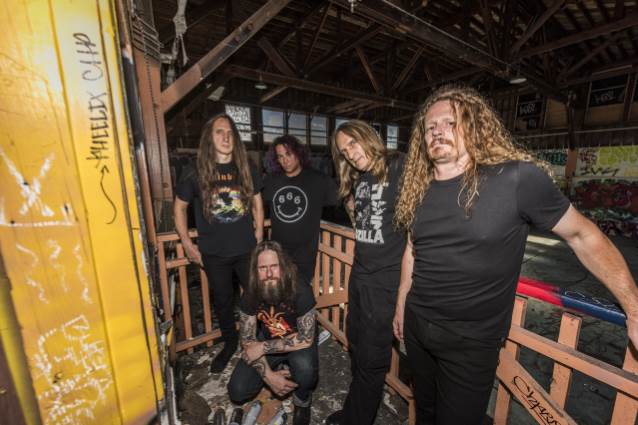 EXODUS frontman Steve "Zetro" Souza said during a press conference at this year's Hellfest in Clisson, France that the band will wait for guitarist Gary Holt to complete his touring activities with SLAYER before they officially begin work on the follow-up to 2014's "Blood In Blood Out" album.

"We all know where Gary Holt is right now," Souza said (see video below). "We wanna let him finish that commitment, and none of us really know how long that commitment is. What we don't wanna do is we don't wanna say that SLAYER takes three months off, and, 'Let's go do a record real quick,' and then they're going to continue the final tour.

"We all decided that it was better than Gary finishes the final tour with SLAYER," he explained.

As for when the next EXODUS album might arrive, Zetro said: "To be honest with you, probably late 2019 [or] early 2020. But I'll promise you this — I've heard songs, 'cause [Gary has] been writing, and the new EXODUS is gonna be very violent and very heavy."

He continued: "Us, as the bandmembers, we're [getting impatient]. We know it's been four years. We're still over here touring on 'Blood In Blood Out'. But we're very fortunate that we could still come to a festival like this, not being able to support a new record. So many great fans still come and support us, and all the press and everybody. So thank you, guys, man; thank you, guys, for always being there for us. 35 years now for EXODUS, and it's because of everybody here and everybody out there; not 'cause of us."

EXODUS will return to Europe in November and December to headlline the 2018 edition of the renowned "MTV Headbangers Ball Tour", which will lead them through 17 cities and venues in nine countries. The outstanding lineup will be completed by newly re-structured Ruhr Area thrash heroes SODOM, U.S. metal act DEATH ANGEL plus Greek underground champions SUICIDAL ANGELS.